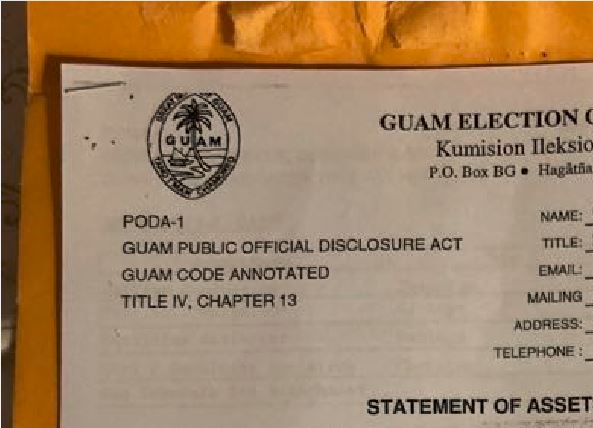 Disclosures are designed to expose conflicts of interest

Guam – No financials yet, and they’re not necessary before the primary. That’s the skinny on three gubernatorial candidates who’ve yet to file their financial disclosures with the Guam Election Commission.

PNC visited the commission on Friday for a look at gubernatorial election packets.

Democratic Senators Frank B. Aguon, Jr. and Dennis G. Rodriguez, Jr. have both filed extension requests for the disclosure of their personal financial statements. And so has Republican Lt. Governor Raymond S. Tenorio. Each of of these three candidates  is requesting your vote for Governor. But if they file after Friday, August 24, you might not be able to see Aguon’s, Rodriguez’s, or Tenorio’s financial disclosures until sometime after the Saturday, August 25 primary.

Why is that? After all, what you see isn’t always what you get.

Inasmuch as local politics takes its cues from national standards, perhaps  a closer look at a well-known watchdog’s explanation serves as a useful reminder.

According to the Center for Responsive Politics’ opensecrets.org website:

Candidates running for president (or any federal office) are required to detail their financial holdings, debt and sources of income so that the public can identify any conflicts of interest they may have.

The Executive Director of the Election Commission shall grant extensions for the filing of financial reports herein required by officials; provided, however, that such extension shall not exceed one hundred eighty (180) days beyond April 22 of each calendar year.  § 13103, Ch. 13, Title 4 GCA

According to law, the word “officials” in this case pertains to those elected or appointed.

And  according to Election Commission files, Aguon, Rodriguez, and Tenorio have all been greenlighted to file their financial statements by or before October 19, or about three weeks before the general election. Assuming a primary-winning gubernatorial candidate with an extension files his financial report by or before October 19, voters will ostensibly have from then till Tuesday, November 6, the day of the general election, to examine that candidate’s financial disclosures.

However, only up to two of the three late financial filers will be participating in the general election, since only one Democratic candidate and sole Republican candidate Ray Tenorio will advance to the November 6 gubernatorial primary.

Tenorio’s other two possible challengers in the general election have already filed their financial disclosures. They are former Democratic Senator Lourdes A. Leon Guerrero and former Democratic Governor Carl T.C. Gutierrez. The financial records already disclosed by Leon Guerrero show her to be worth about $5 million. Disclosures by Gutierrez show him to be worth about $3.9 million.

PNC is asking the camps of all three gubernatorial contenders who’ve been approved  for financial disclosure extensions whether they plan to file any time before the primary election, and, if so, when.

Aguon campaigner Valerie Maigue wrote back, “Senator Aguon has every intention of filing his financial disclosure report with the Guam Election Commission before the deadline.” Maigue, however, did not specify which deadline, whether the official October 19 filing extension deadline or sometime before the August 25 primary election, so voters can see how they’re earning, saving, and spending their money. We’re still awaiting responses from the other campaigns.