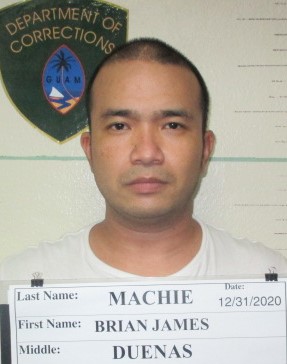 A man who learned how to break into coin-operated machines on the internet got caught by police sleeping on a heist and he’s now behind bars.

Brian James Duenas Machie has a history of drug possession offenses and in the new case he picked up over the weekend, he is now facing drug possession and criminal mischief related charges.

According to court documents, police were called to the Pacific Star Hotel in Tumon where police discovered that someone had tampered with the laundry room coin changer machine.

Security footage showed that a man entered with a crowbar and pried the coin changer machine open. Later that day, police responded to the Garden Villa Hotel for a similar report but in this case, staff reported that the culprit was passed out in the hotel laundry room.

Police identified Machie sleeping in the laundry room and next to him was a bag, drill, pry bar, pliers, and a butane torch. Authorities say Machie admitted that he was there to steal money from the machines.

“He stated that in the process of tampering with and drilling the coin slot he suddenly felt tired and dozed off,” court documents stated.

Machie indicated that he learned techniques to access coin slot machines by watching Youtube videos. Police searched Machie’s bag and discovered 5 syringes filled with methamphetamine. Machie told police that he was a habitual meth user and preferred to shoot up rather than use a pipe.