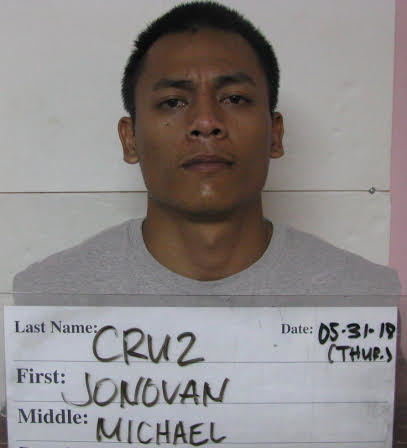 Guam – It appears that the armed robbery of the Lucky Land game room involved more than the two men captured on surveillance video.

Authorities have announced that a third man has been implicated in the robbery investigation.

GPD Spokesperson Paul Tapao states that Jonovan Michael Laitan Cruz was arrested for his alleged involvement in the recent robberies which occurred at the Lucky Land gameroom, Ritidian Beach and Ritidian Point.

As you may recall, Jeremy Allen Evaristo and Jessie Delgado were also arrested in connection with the robberies which occurred in May.

Evaristo was identified as the man who fired two gun shots at the game room cashier as well as another robbery at the Palms Market in Dededo, in which he again fired a shot at the cashier.

The two men are being held on $250-thousand dollars bail.

Police say that Cruz drove the two men to the Guam Community College where the red Honda Accord seen in the video was stolen.

While Cruz denied knowing that the two men were going to steal a car, Delgado told police that Cruz “had knowledge of their intentions.”

This is not the first time Cruz has been implicated on robbery charges. According to court documents, he was arrested last year in connection with two other game room robberies.

In this recent case he was charged with theft of a motor vehicle, conspiracy and guilt established by complicity, among other charges.