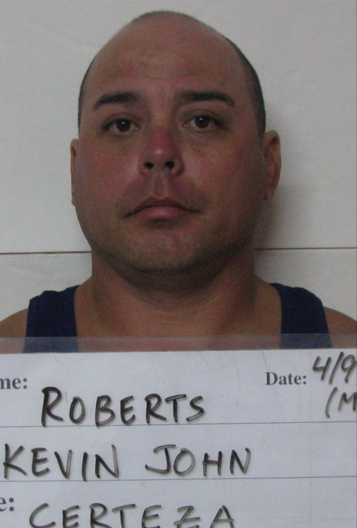 Guam – A convicted sexual predator has allegedly struck again. Yesterday we shared with you the latest allegations he faces, today we take a deeper look at his criminal past.

For the initial charge Roberts was found guilty by a jury in 2009 of second degree criminal sexual conduct and sought to appeal that conviction.

In the second arrest Roberts took a plea deal with the government agreeing to abandon his appeal and plead guilty to second degree criminal sexual conduct in 2011.

By this time he had already served more than four years in prison out of a ten year sentence.

Court documents state that the prior conviction was vacated and combined with the 2011 conviction. This meant that he would not serve any additional time instead he was given a sweethearts deal which allowed for him to serve a concurrent 10 year sentence.

Since completing his incarceration, Roberts has allegedly re-offended, but the latest allegation appears to indicate that the violent nature of the crime has escalated from his previous MO of molesting minors to now the rape of a 25-year old woman.

In this case the victim allegedly woke up in a car to Roberts penetrating her.

If convicted, this could be Roberts third strike which means he could serve life in prison, in addition to having his parole revoked.

Alleged repeat offenders such as Roberts raises the question, what else can be done to prevent and deter criminal sexual offenders from committing the crime again?

As you may recall, in 2015 chemical castration was passed into law. The law was intended to help protect men, women and children from sexual predators by requiring the Department of Corrections to create a program to screen and refer convicted sex offenders who are eligible for parole to volunteer to participate in the program.

The purpose of the program was to reduce their ability to risk of hurting someone else while they are out on the street by administering a hormone or anti-androgen treatment that will reduce the sex drive.

However, according to DOC Director Tony Lamorena, because the mandate is unfunded DOC has not had the ability to implement the program.

Meanwhile, in the past non-US Citizens convicted of criminal sexual conduct have been deported or are subject to deportation.