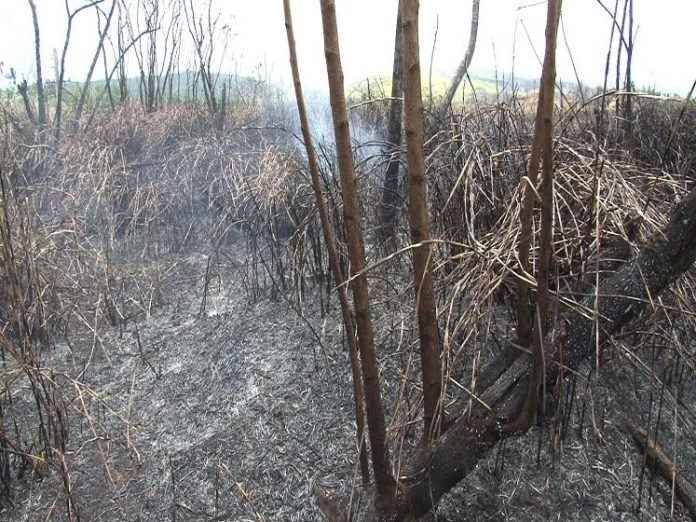 Meanwhile, with this latest grass fire, Camacho says the Guam Fire Department has encountered a large number of fires.

Guam – One of the largest grass fires of 2016 started over the weekend spanning over 400 acres and putting Guam under a fire weather watch until Tuesday.

Nimitz hill has been painted charcoal black for the past three days thanks to a grass fire that spread over 400 acres. The fire, which was first reported at 7 a.m. Saturday was combatted with the help of a navy helicopter to spray water from above.

The fire was originally extinguished at 9:03 p.m. Sunday night, but came back to life on Monday morning.

“The initial 911 call was for rekindled fire at turner road, but the company Engine 7 went up and the captain was stating that there was smoldering limbs, embers, so the smoke was visible but no flame,” said GFD PIO Phillip Camacho.

Camacho says the wind definitely played a factor in the ‘rekindling of the fire.’

He says the navy is currently saturating the area with water to prevent the smoldering from turning into a fire.

Meanwhile, with this latest grass fire, Camacho says the Guam Fire Department has encountered a large number of fires.

“Starting January, up until yesterday, the Guam Fire Department fought 515 grassfires, that’s our stats, the Department of Agriculture has their own and the military of course,” said Camacho.

Camacho says this year’s number of grassfires is “higher than normal.” Currently, the national weather service has declared a fire weather watch for today until Tuesday afternoon. According to NWS, dry conditions and gusty winds could increase the risk for fire danger, especially in the central and southern portions of Guam, with the most dangerous time for fires being from the late morning until near sunset.