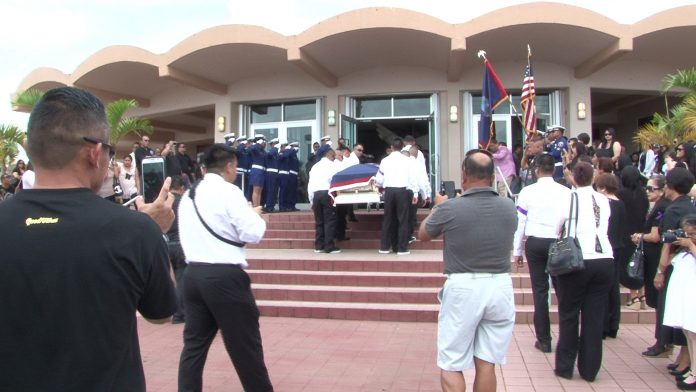 Police Officer Sgt. Elbert Piolo was laid to rest at the Our Lady of Peace Memorial Park in Windward Hills.

Guam – Thousands of people showed up to the funeral of the late Sgt. Elbert Piolo on Saturday. It was an all-day affair as mourners lined up to pay their last respects to the fallen police officer.

It’s not often that funerals are so crowded that people would wait hours in line just to bid someone farewell, but that was indeed the scene for Guam Police Officer Sgt. Elbert Piolo.

Among those who attended the funeral were island dignitaries and Sgt. Piolo’s brothers and sisters in blue. Last respects were held at Santa Barbara Catholic Church in Dededo between 9 am to 1 pm on Saturday and during those four hours, the line was so long, it wrapped around the outside perimeter of the church—evidence of just how much Sgt. Piolo was loved and the many lives he touched.

After mass, a motorcade led the procession from Dededo to Sgt. Piolo’s final resting place in Windward Hills at the Our Lady of Peace Memorial Park.

Then on Sunday, Sgt. Piolo’s friends and family gathered at the Beach at Gun Beach for a tribute concert honoring Piolo. Sgt. Piolo was also a musician and was a member of the band Soul Vibez as a percussionist.

Dozens of the island’s known musicians attended the tribute to honor a fellow musician.

Sgt. Piolo left behind a wife and four children, one of whom is less than a year old. Sgt. Piolo was 38 years old.

Meanwhile, the man accused of murdering Sgt. Piolo, fellow officer Mark Torre Jr. is due back in court on Wednesday, July 29 for his arraignment. Torre was indicted last Friday on charges of murder, manslaughter and aggravated assault.