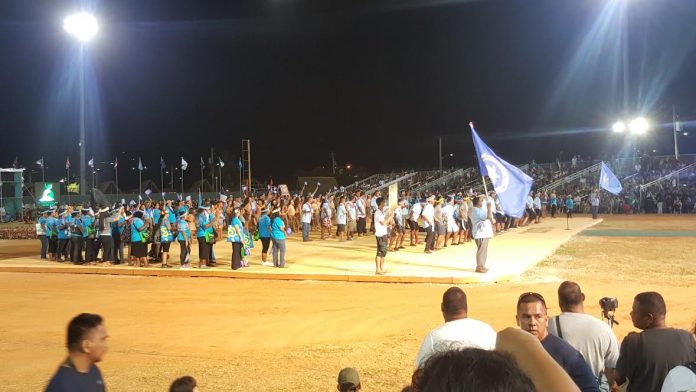 FESTPAC was a sight to behold, especially if you were among the lucky thousands attending the FESTPAC opening ceremonies in person.

Guam -Dozens of residents and visitors gathered at Paseo just before sunrise on Sunday to welcome traditional seafaring vessels. This picturesque welcoming ceremony kicked off the 2016 Festival of the Pacific Arts. Seafarers from Yap, Palau, Chuuk, the Commonwealth of the Northern Mariana Islands, and the Marshall Islands were greeted with a traditional chant and kulu blowing.

Then just before sunset, delegations from participating Pacific Island nations dressed in their traditional wear headed to Paseo once again for the official welcoming ceremony. The ceremony started off with a man parachuting down to the center of the field waving a large Guam flag for the spectators below. Thousands of residents and visitors filled the stadium to watch participating delegations take the stage one at a time to showcase their culture and heritage in the parade of delegations. After each performance, they presented gifts from their nation to the Governor of Guam Eddie Calvo and First Lady Christine Calvo.

Last but not least, Guam, as the host country, took the stage with 500 delegates. Closing off the night’s ceremony, Guam’s cultural dancers showed the other Pacific Island nations what our island and culture are all about.