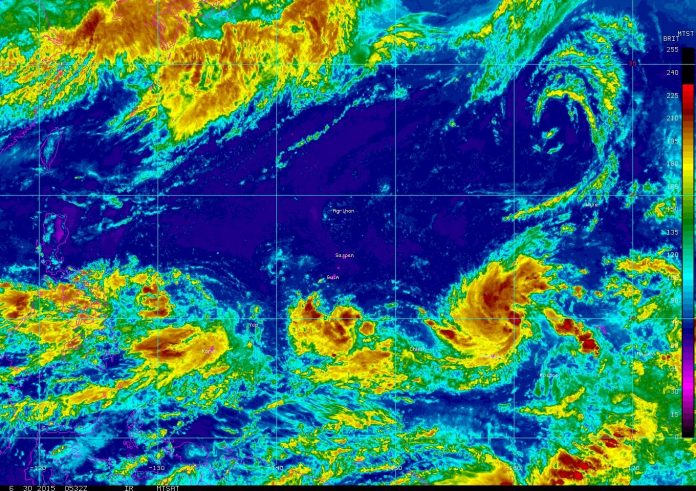 Despite the appearance of another circulation, 94W and 95W are better organized today.

Guam – The National Weather Service points out that three circulations are found in the Micronesia along the actice monsoon trough.

Earlier today, NWS said that five small circulations were spotted; however in its latest Area Forecast Discussion, the Weather Service says, “Across Micronesia…Convection along the monsoon trough has become more consolidated around 3 circulations.”

While the newly appeared circulation is still being developed around northwest of Koror near 12N 131E, Invest 94W and 95W are better organized compared to past few days. NWS says that despite the presence of uncertainties, models agree in general that 94W will be absorbed by 95W which is heading towards the west-northwest.

“Made some significant changes in both marine and wind grids to better align with model guidance in bringing a tropical cyclone toward the Marianas over the weekend,” NWS continues in its Area Forecast Discussion and also notes that increase in rainfall could happen as early as Friday and that the heaviest rainfall is expected during this weekend.

Regarding the marine conditions influenced by the tropical systems, the Weather Service also writes, “Combined seas of 4 to 5 feet will continue through Thursday then build to between 6 and 8 feet Friday. Seas will build further as the developing circulation nears the Marianas over the weekend.”

.WEDNESDAY AND WEDNESDAY NIGHT…PARTLY CLOUDY WITH ISOLATED SHOWERS. NORTHEAST WINDS 10 TO 15 MPH. HIGHS AROUND 88. LOWS AROUND 77.

.THURSDAY NIGHT AND FRIDAY…MOSTLY CLOUDY WITH ISOLATED SHOWERS AND THUNDERSTORMS. NORTHEAST WINDS 10 TO 15 MPH. LOWS AROUND 77. HIGHS IN THE MID 80S.