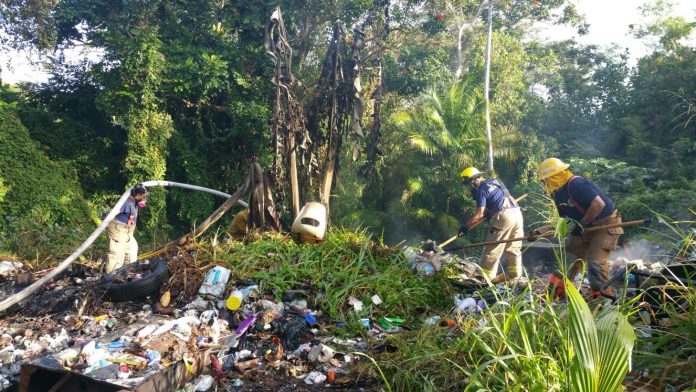 The Guam EPA will also be investigating the illegal dump site to determine if any violations occurred.

Guam – Three homes in Chalan Pago had to be evacuated early this morning because of a deep seated fire at an illegal dump site. Investigators are now trying to determine the cause of the fire and the Guam EPA is also stepping in to look into possible violations.

Guam Fire Department Spokesperson Kevin Reilly says the 911 call came in shortly before 5 this morning about a fire in Chalan Pago.

“Just before 5 am our dispatch received a call for a possible trash fire and possible illegal dump site. Our units went out there and confirmed,” explains Reilly.

Chalan Pago Mayor Jesse Gogue also visited the area just after 5 this morning. The fire and illegal dump site was located along Chalan Kakkak in a ravine. He says he interviewed some residents and got a better understanding of what might have led to the fire.

“Apparently what had happened was they were burning trash and the trash jumped and went into a bigger pile of trash that they had in the surrounding area. When that bigger pile of trash caught on fire, it ignited but they didn’t have any water to their home so they couldn’t put it out. So they figured they’d just let it burn out. Instead of burning out, it just expanded to the point where you could actually see smoke early in the morning covering Route 4,” the mayor explains.

The mayor says a passerby noticed the thick black smoke billowing from the Route 4/Route 8 intersection and made the 911 call. Mayor Gogue notes that there were about 10 residents living within the 3 homes that needed to be evacuated.

“Hazmat came down and took some air samples and actually said, ‘Hey, we need you guys, need to leave the area because based on our testing the smoke is thick enough and toxic enough that it’s actually hazardous to your health,'” notes Gogue.

“We [will] turn it over to EPA for investigation and they’ll look into the dump site operation, if it was in fact one. Our units also, our fire prevention bureau will also try and determine the cause,” says Reilly.

Reilly says the fire was eventually extinguished around 9 am.

Mayor Gogue says authorities will continue to monitor the illegal dump site to ensure that the fire doesn’t reignite.