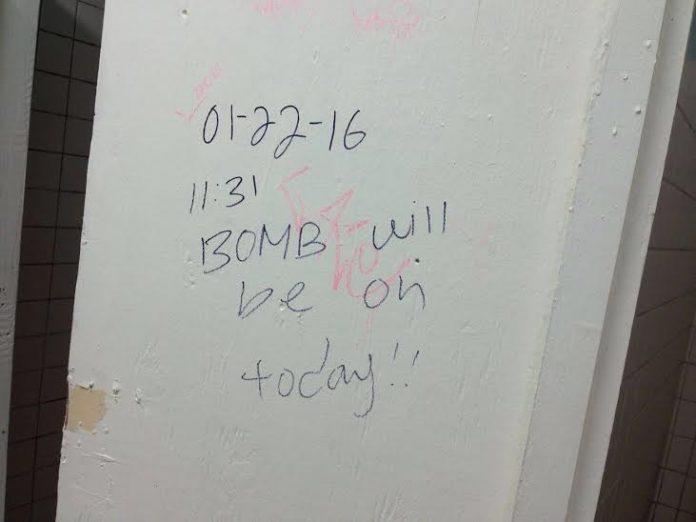 It’s one bomb threat after another within a week, and today, within a day. The Guam Department of Education is working closely with the Guam Police Department to find the person or persons responsible for the recent bomb threats. Over the last couple of weeks, there have been ten bomb scares all together, all resulting in negative findings. What’s more, it seems to be a trend because all the bomb threats were written, either in a form of note or graffiti on the wall.

Guam – Southern High School was evacuated again this morning due to another reported bomb threat.

GDOE Acting Deputy Superintendent Chris Anderson, “Roughly around 8:30 this morning, the school principal contacted central office to let us know they received a written bomb threat. The threat indicated the date, the time, and the message bomb.”
This bomb threat was scheduled for today at 11:31 am. A sweep was conducted by law enforcement officials. At about 10:30 am, students were released from school. This is the fourth time within a week that Southern High School had to be evacuated due to bogus bomb threats.
At around the same time, a bomb threat was reported at Guam High School inside Naval Base. According to Navy Base Public Affairs Officer Maj. Jeff Landis, the students were evacuated immediately after the bomb threat was reported. The all clear was given at 11:30 am and classes resumed. Public Affairs Officer Lt. Tim Gormon says they found a handwritten note in one of the girl’s restrooms.
Then, around 2:20 pm, there was a reported written bomb threat found at Inarajan Middle School. The school was also evacuated. Students were dismissed by the time the sweep of the campus was completed.
This most recent bomb threat marks the tenth bomb threat reported at Guam schools in the past week. Other schools that have received bomb threats include Simon Sanchez High School and Agueda Middle School.
Anderson explains, “We’re highly concerned because not only are students losing instructional time but it’s also a drain for the government resources. Calling public safety officials is not cheap, it’s costly and then trying to coordinate with the military or airport for their K-9 units, again is another logistic coordination and cost. We’re very serious and very concerned.”
In fact, they’re so concerned that GDOE Superintendent Jon Fernandez met with both GPD Chief J.I. Cruz and GFD Chief Joey San Nicolas to develop a threat-risk assessment matrix. Anderson says, “Depending on how that goes, we may be using that to help us determine what type of assets we need to call to mitigate the threat depending on the level of threat. We’ve been taking pictures of course of the threats and sending it out to our faculty. If they’re able to identify the writing, that’ll be a lead for both the school and GPD to further investigate to find out who these kids are, who may be responsible and hold them accountable.”
Anderson says they’re asking students to help put an end to the bomb scares. “The students are probably the best solution to this in terms of their own peer influence to try and cut this out because it’s getting dangerous. You never know how kids are going to react to elements. They have to wait outside exposed to heat, different things can happen. If someone gets seriously injured, the person who called this bomb threat is going to be responsible,” he says.
GPD is reminding the community that any information about the recent bomb threats can be provided to Guam CrimeStoppers at 477-HELP (4357). “If you call and the information you provide leads to an arrest, you could get a cash reward up to $1,000,” said GPD Officer Paul Tapao.