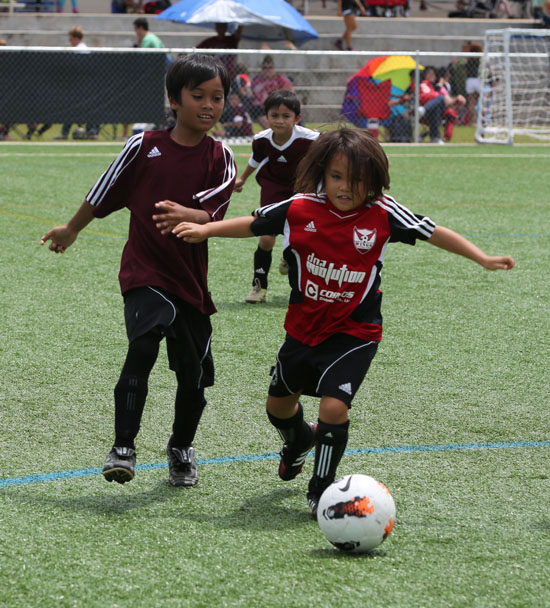 Guam – Every time the Tigers gained the upper hand, Quality Distributors Blue just wouldn’t let down, forcing their opponents to settle for a 2-2 tie in the U12 division of the Chevrolet Robbie Webber Youth Soccer League Spring season at the Guam Football Association National Training Center.

“It felt good to score in the last few minutes to tie,” said Quality’s Matthew Calip, a student at Oceanview Middle School. “For our next game I think we need to work on passing more and try to score more goals as a team.”

The Tigers found their opportunity early in the first half when Quality’s defense tightened in the midfield, leaving Anthony Moon unmarked near the goal. Moon didn’t disappoint his teammates, sending a shot from the left side to the opposite post for the score.

Quality knotted the game early in the second half when Ally Dumlao connected on a kick-in from teammate Tiffany Lopez. The Tigers’ second-half goalkeeper, Luke Kim, initially blocked the shot but was unable to secure the ball before Dumlao kicked it again to roll it into the goal.

[The Wings played against Tumon in the U8 division of the Chevrolet Robbie Webber Youth Soccer League at the Guam Football Association National Training Center Saturday.]

Minutes later, the Tigers found themselves in the lead again following a shot from Alvin Yang, however, Quality would deny a win before the final whistle. Calip connected on a through pass from Dumlao for the final score of the match.

“After they scored another goal (in the second half), I didn’t think we could win because I knew we had very little time,” said Dumlao, a student at St. Paul Christian School. “When Matthew scored though, I felt relieved. At least we got a tie and we didn’t lose.”

In other U12 games, Quality Red blanked the Orange Crushers 7-0, Quality battled to a 2-2 draw against Community First in a morning match, the Strykers edged the Wolverines 3-2, Samurai Heat shut out Tumon 4-0, the Sidekicks beat Community First 5-2, the Strykers edged the Sidekicks 1-0, the Wings beat the Southern Cobras 4-1 and the ASC Islanders Betde 5-1, and the Wolverines beat the Islanders Asut 3-1.

In U14 matches, Islanders Betde settled for a 2-2 draw with Quality, the Crushers defeated Community First 2-0, the Wings edged the Strykers 2-1, Islanders Apaka beat the Wolverines 7-3, Quality and the Cobras settled for a scoreless draw and the Islanders Asut beat Tumon 3-0.

In U18 matches, the Islanders Betde defeated Quality 7-1, the Wolverines and the Wings blanked both Samurai Heat teams 3-0 and 7-0, the Cobras defeated the Strykers 5-3, the Sidekicks and Islanders Apaka battled to a 1-1 draw, Cobras I defeated Wings Black 5-1, Wings Red blanked the Sidekicks 5-0, Islanders Asut shut out Tumon 3-0 and the Quality Red and Blue teams settled for a 0-0 and 2-2 draw against Community First and the Strykers, respectively.