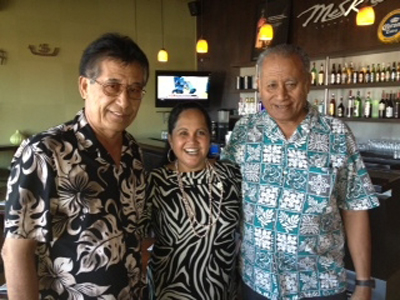 Guam – Senator Tina Muna-Barnes has announced that she meet this past week with Palau President Tommy Remengesau, Jr., and FSM President Manny Mori  in an effort to increase regional collaboration on tourism-related issues.

In a release, the Senator says she discussed the importance of developing a “region-wide” approach to tourism, the opportunities for collaboration and the challenge posed by the raising cost of air fares in Micronesia..

Muna-Barnes is the Chair of the Legislature’s Tourism Committee. The release quotes her as saying “the rising cost of airfare to and among our islands is a regional problem that requires a regional solution … and something bold needs to be done about that.”

READ the release from Senator Muna-Barnes below:

Hagåtña- January 23, 2013—Following on the heels of her meetings this past week with Palau leaders including President Thomas (“Tommy”) Remengesau, Jr., Senator Tina Muña Barnes met today with FSM President Emanuel (“Manny”) Mori as part of her renewed efforts in the 32nd Guam Legislature to increase regional collaboration on tourism-related issues.

The subject of their meeting was the current state of regional tourism, including challenges shared by our neighboring islands as well as the opportunities for collaboration and growth in our respective industries. Senator Muña Barnes and President Mori discussed the need for leaders across Micronesia to work together to come up with a region-wide approach to addressing the rise in air travel in the region.

“As Chairperson on Tourism, I have engaged with stakeholders across both the private and public sectors and know that the rising cost of airfare to and among our islands is a regional problem that requires a regional solution,” says the Senator.  “Airfare costs in this region have risen beyond the reach of too many of our people, and something bold needs to be done about that.”