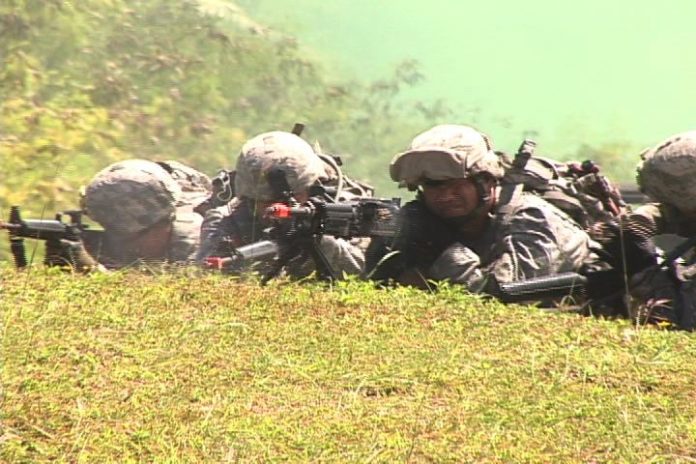 Guam – Speaker Judi Won Pat says that the Tinian mayor is concerned about the military’s plans for the island. Tinian Mayor Joey San Nicolas recently met with both the Speaker and the Vice-Speaker about his concerns with the military’s planned use of Tinian.

DOD recently released it’s joint military training Draft Environmental Impact Statement which outlines the military’s plans to use the Northern Mariana islands of Tinian and Pagan for training exercises. These plans have sparked concerns amongst the people on Tinian and their Mayor Joey San Nicolas came to Guam a couple of weeks ago and met with Vice-Speaker B.J. Cruz and Judi Won Pat to voice his people’s concerns.

“His concern was that their quality of life would definitely be impacted. Right now the way the leadership is they’re partaking a unified stand that they’re saying no to Tinian,” said Speaker Won Pat.

The Speaker says Mayor San Nicolas brought the message that they do not want their island to be used for the training described in the EIS. According to the Speaker, Mayor San Nicolas says his people are concerned about things like noise pollution and the contamination of Tinian’s environment. The mayor told the Speaker that the military still has not cleaned up toxic sites from World War II and they are very concerned about not being able to access important cultural sites. “They are concerned that there will be this dredging of the ocean floor for this amphibious vehicle to go in but the fact that there’s going to be this live fire training that’s going to take place is very close to where the families live,” said Speaker Won Pat.

The leadership of Tinian directed the mayor to come to Guam and learn more about how the island responded to the EIS for Guam’s military buildup. The speaker says the mayor indicated that they are concerned that most of their island would be used for military purposes. “They can’t help but think then that it’s not just the use of three fourths of the island but possibly take over the whole island and what then would happen to the people?” asked Speaker Won Pat rhetorically.

The Speaker encourages the community to read this EIS and learn more about the military’s plans for training on Tinian and Pagan. Go to www.cnmijointmilitarytrainingeis.com to read and comment.