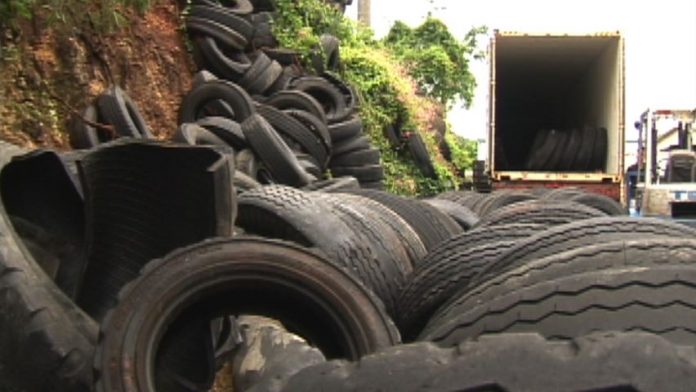 Why are tire shops holding on to used tires?

Guam – Mountainous piles of tires can be spotted near tire shops and warehouses throughout the island.

Companies charge disposal fees to take the tires so PNC set out to learn why the tires aren’t being sent out for recycling.

Guam Environmental Protection Agency Administrator Eric Palacios explained we’ve mostly been at the mercy of the international market when it comes to disposing of used tires.

“When Vietnam decided that it wasn’t going to accept anymore waste tires from anywhere in the world that essentially created a lot of the backlog that we see today.”

A new tire shredder was expected to be available by early this year but Guahan Waste Control had some delays in getting the new shredder to Guam. The public comment period to license the shredder begins tomorrow and manager Bob Paran says he hopes his company can begin accepting tires for shredding soon.

“If they were to catch fire obviously the toxins that they released that’s harmful to the environment,” Palacios said of the environmental concerns caused by tire piles. “Any sludge that gets into our water ways after the tire has melted that becomes a hazard to our environment.”

Another shredder was used on tires for the Ordot Dump closure but Palacios says that was a metal shredder that wasn’t specifically intended for tires. He adds that hat service was offered by another recycler to help the government move the Ordot Dump project forward.