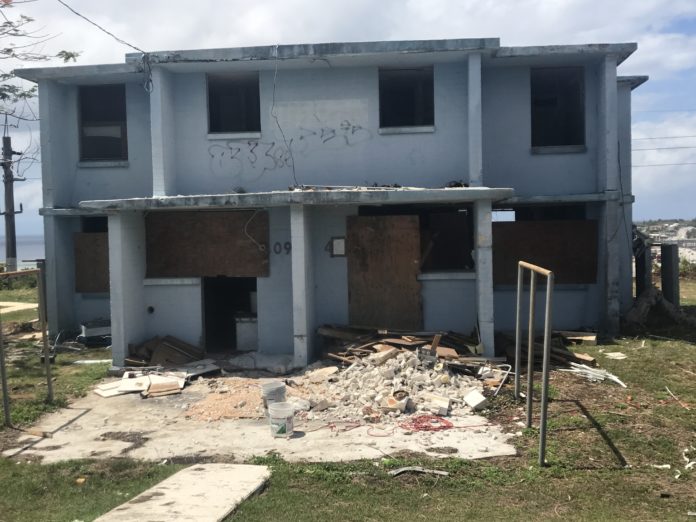 Guam – Thirteen old Navy houses in Tiyan are being renovated but the contractor might not be properly handling and disposing of the asbestos and lead based paint that is in the buildings. In fact, we found debris strewn all over the front lawn of one of the buildings.

“Historically it’s known that hazardous materials such as asbestos and lead based paint has been used in the construction and finishing work for the design of those homes so that would be the concern,” said Guam Environmental Protection Agency Public Information Office Nic Rupley.

Rupley says buildings undergoing renovations with asbestos and lead need to be handled a certain way and need to get the proper permits from Guam EPA. Thirteen old navy buildings are being renovated by a Canton Construction Corporation. These buildings are known to contain asbestos and lead based paint. The permit that the Canton Corporation has with GEPA does not allow them to disturb any of the asbestos or lead. In fact, they are supposed to instead do an encapsulation process which is essentially a method where the asbestos in the flooring and lead in the paint on the walls and ceiling is encapsulated or sealed off with a layer of cement.

“The removal of asbestos containing material is not permittable until such time that they acquire the services of a certified asbestos handler,” said Rupley.

In fact, the contractor is not supposed to disturb any flooring, existing walls and ceilings “without first obtaining written notification from Guam EPA.” The Canton Corporation has not received this from the Guam EPA and they have not secured any asbestos or lead removal specialists.

However, PNC found that a bunch of debris was strewn all over the front of one of these building. The debris contained what looked like chunks of cement. We also saw a few construction workers inside and even heard them using what sounded like a jackhammer or other mechanical chipping device.

“It’s our understanding that the walls and the flooring will be encapsulated. They’ll supply paneling and fresh paint and fresh flooring,” said Rupley.

The contractor is not supposed to remove anything that could potentially have asbestos or lead without checking with GEPA first and acquiring a certified removal specialist. Rupley says they have not done either of these things.

Rupley says that they have spoken to Canton Construction who informed them that they will be hiring a certified ACM and hazardous waste handler for the project. He says all applicable permits from the Guam EPA are forthcoming along with a disposal plan and toxicity characterization. As for the noise that sounded like a jackhammer to us, Rupley says Canton Construction told them this is from “workers retrofitting some temporary locking mechanisms.”