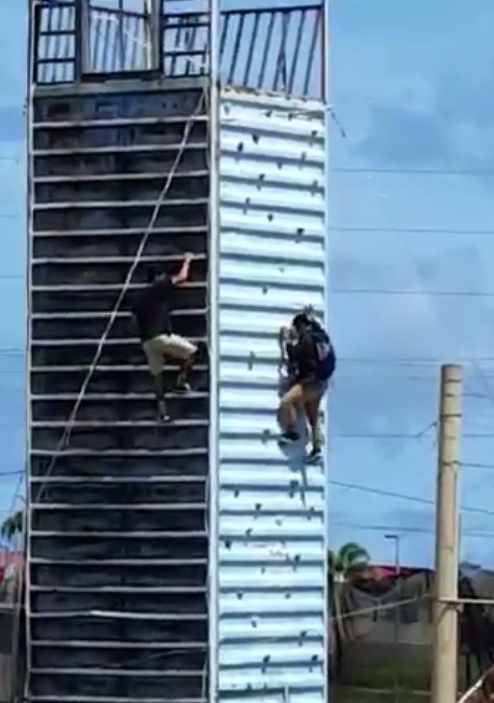 Guam – Disciplinary measures could be facing a few Tiyan High School students who decided to walk off campus yesterday and climb a rappel wall at the nearby carnival grounds with no rope or oversight.

The whole thing was caught on video, but it didn’t end well for one student who lost his grip halfway up the climbing wall. The video, reportedly recorded by a fellow student shows the male on the left slip and fall, hitting what appears to be a wire on his down. GDOE’s Deputy Superintendent Chris Anderson said the school and senior management and the parents of the students were immediately notified after the incident.

“He and one other student were climbing the rappelling tower and had unfortunately had fallen off the tower and came back onto the campus. He was seen by a substitute teacher. The substitute teacher tried to get him medical attention, but he refused the medical attention and was seen taking off in another vehicle. My understanding is that he underwent a CT scan as a result,” he said.

Anderson says both students are a part of the Eskuelan Puengi Program, which is an after-school/evening program provided to students who are either failing or receiving “NC”’s in school.

Now that there’s footage of the students engaging in off-campus shenanigans during the after-school program, Anderson says there’s a good chance they will be removed.

“I can’t speak for the principal, but there’s a good chance the student will be removed from the program since this happened,” he shares.

But it’s not just the students climbing the rappel wall; Anderson said the student recording the incident could be facing disciplinary measures as well.

“Actually (recording) is classified as reckless conduct. The Department sort of adjusted its protocol not only to adjust the combatence, but anyone who was involved in planning it, refereeing it, and videotaping it,” he shared.

The carnival is adjacent to Tiyan High School’s back yard, an unfortunate convenience according to Anderson.

“The superintendent has written a letter to the Mayors’ Counsel of Guam either to ask for assistance to mitigate that tower remove it completely or do something to ensure the students do not climb that tower itself. And then, do a comprehensive review of the fairgrounds…anything that may peak the students’ interest. So, we’re hoping we get the support of the Mayors’ Counsel to effectively address that as soon as possible,” he said.

There is no official word yet on any major injuries sustained. Ultimately, Anderson says it’s up to the principal of Tiyan HS to decide on the course of disciplinary actions.