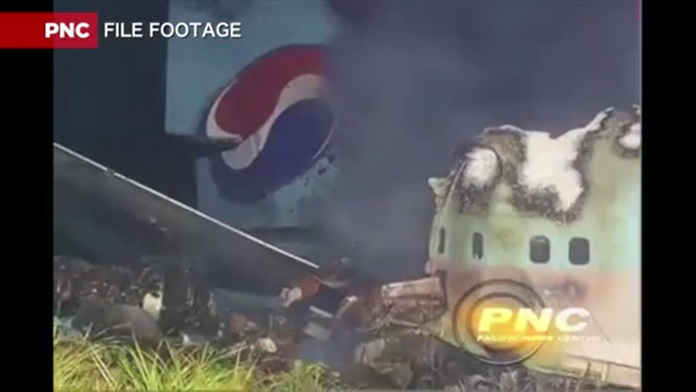 On August 6, 1997, Korean Air Flight 801 tragically crashed in Nimitz Hill approaching the Antonio B. Won Pat International Airport, killing 229 of the 254 passengers on board.

In an interview on NewstalkK57 with Patti Arroyo, Barry Small– helicopter pilot and survivor of the crash recounted his experience of the event. He said, “It’s a feeling that will stay with me forever. I think I had to emotionally remove myself from this scenario to some degree to cope. But yes, all the memories and pictures in my mind are as clear as yesterday.”

Former Governor Carl Gutierrez also shared with K57 listeners, his recollection of events, and his point of view of the incident as the Governor of the island when the incident occured. He said, “First of all, about three months to get over my lungs getting affected by the explosion that went on. That plane, when it blew up, it blew all the ashes and the chemicals on Rika, myself, and the flight attendant. Barry was a little bit to the left of us.”

Rika Matsuda who was 11 years old at the time, was on the way to Guam with her mom, from Japan for vacation on the day of the crash.

Unfortunately, Rika’s mother passed in a fire caused by the crash, as she was pinned under by luggage.

Sorensen Media Group’s Patti Arroyo was on the scene when this tragedy occurred.

In an interview on Mornings with Patti on K57, she speaks to SMG alumni Jefferson Cronin who was also on the scene with her. He said, “We started doing our jobs, reporting to the world. We scooped the world on this one. You know it was one of those days as a journalist, as a reporter, and I think especially in radio– because radio was on the spot live. You dread but live for moments like this.”

Arroyo and Cronin trek through the jungle. Arroyo with two phones in hand reporting the plane crash and Cronin guides her as she reports to multiple news outlets. No paper in hand as she jots down important information on her jeans. They see the tail of the plane.

Cronin said, “I just remember coming up on Nimitz Hill and we were standing on the overlook we saw the tail–just on fire. It was prominent. It said ‘KAL’– the insignia of KAL logo and then the whole thing was black smoke and you could smell jet fuel.”