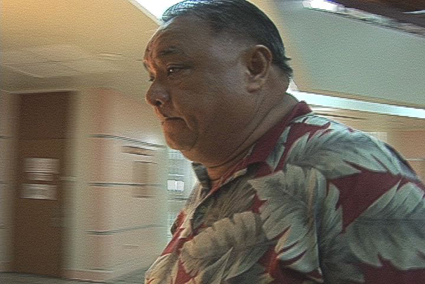 This past May a Jury found Topasna guilty of theft by deception for selling a piece of land that he did not own to a family member.

During trial the prosecution presented evidence that Topasna received $12,500 dollars from a victim who was given a fake warranty deed signed by Topasna. When the victim tried to register the property at land management he was told that the property did not belong to Topansa.

In long, rambling, remarks before the court this morning, Topasana said “I did not deceive or defraud anyone.” He said “I feel I was the one deceived by this matter.”

However Assistant Attorney General David Rivera pointed out that even though Topasna has not been convicted before, he was indicted previously in a similar case [in the land scam cases of the early 90’s.] And Rivera also pointed out that on 2 other previous occasions Topasna accepted money from other family members for this same piece of property. And those other “family members didn’t get their money back” either, he said.

Rivera suggested no charges were brought in those other 2 cases because the close knit nature of Chamorro society makes it difficult for one family member to bring charges against another family member.

Rivera also argued that Topasna expressed “absolutely no remorse.” He said “Mr. Topasna never had title to this land. In effect what we have here is a classic land scam and certain victims are out of money.”

Rivera asked for a 3 year jail term and a fine of  $10-thousand dollars.

But Judge Bordallo settled for a 5-year suspended sentence, 60 days in jail; a 3 year term of parole; restitution; a fine of $5-thousand dollars and the payment of court costs.

Topasna was ordered to surrender himself on Friday October 1st to begin his 60 days of incarceration.

In explaining his sentence, Judge Bordallo suggested that the victim bears some of the responsibility for falling for Topasna’s deal, saying that “It is one of those cases where if it appears too good to be true, it probably is.”  He said “buying 2 acres of land for 10-thousand dollars”  was “like buying a car for $100-dollars”  and then complaining because “the engine didn’t work.”

“However,” said the Judge, “he was convicted by a jury.”