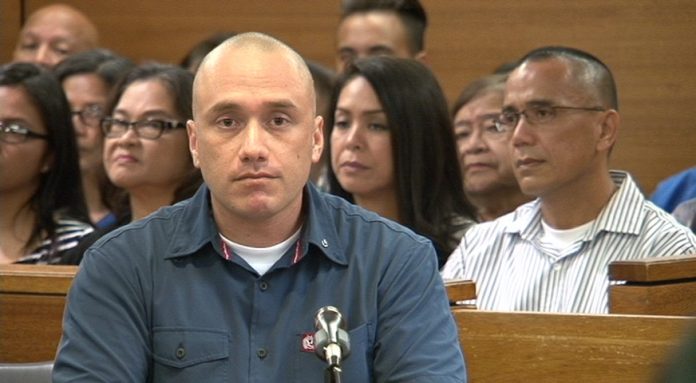 Jury selection and trial is scheduled for October 17 but if the request for continuance is granted, trial will not be scheduled until after October 17.

Guam – Another delay is possible in the Mark Torre murder trial. Defense Attorney Jay Arriola indicated that he may be seeking a continuance of trial based on a recent Supreme Court ruling.

It’s been nearly a year since Police Officer Sgt. Elbert Piolo was gunned down outside the house of former Police Officer Mark Torre Jr., who’s accused of pulling the trigger that killed Piolo.

A trial date of October 17 has been scheduled, but today in court Defense Attorney Jay Arriola indicated that he may be seeking a continuance of trial.

“Based on the recent Supreme Court decision on People v Blas, we will be seeking continuance of the trial date as scheduled by the court,” announced Arriola.

That Supreme Court decision Arriola is referring to is People v Frankie Garrido Blas. In that case, the Supreme Court overturned the lower court’s denial of Blas’ motion to continue trial. Blas was seeking a continuance of his assault trial by about a month to allow an off-island witness to testify.

“There’s some factors that the court had put out on whether or not a continuance is in order so I guess counsel believes that he’s going to argue some of those factors for the continuance,” Assistant Prosecutor Attorney Joseph McDonald explains.

Exactly what Arriola plans to argue on behalf of his client is not clear. What is known is that Superior Court Judge Michael Bordallo has set trial to begin on October 17, which means if the judge grants Arriola’s motion to continue, trial may once again be delayed to after October 17.

Meanwhile, the prosecution says they are still in the process of finding a forensic expert who can analyze the psychological findings for Torre, in particular post-traumatic stress disorder.

“We are also looking for an expert with regards to the PTSD and … so we’ve looked on island, there are no experts on island. We continue to look off island,” McDonald notified Judge Bordallo.

“Well you gotta find somebody quick because if they’re going to do, if they’re gonna need something other than the records that were produced, that’s fine, but if we need additional work done then they need to come on island to get it done so that they can get a report over,” Bordallo told McDonald.

As far as evidence is concerned, Judge Bordallo ordered the AG’s Office to send over all outstanding evidence collected to the FBI for forensic analysis. The parties are then expected to narrow down which pieces of evidence will be tested at the next hearing scheduled for August 15.

Judge Bordallo also ordered the defense to file its motion for continuance by the next hearing on August 15 at 9 am.