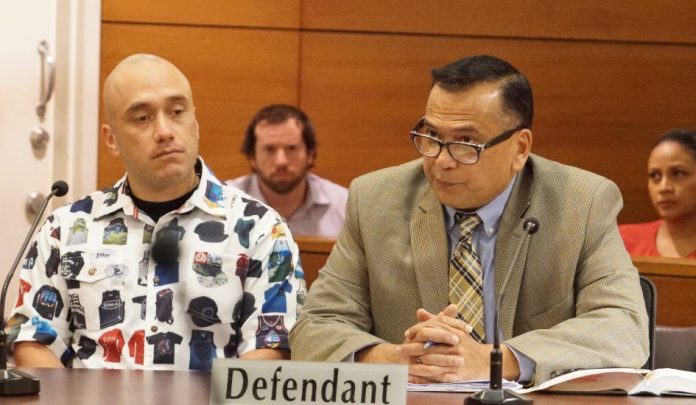 For two years Mark Torre Jr. has been on house arrest accused of pulling the trigger in the shooting death of fellow police officer Elbert Piolo. But it’s back to square one, as a new trial is gearing up and with hopes that his good behavior counts for something he asked the court to modify — his release conditions.

The only charge pending against Mark Torre Jr. is aggravated assault as a third-degree felony with a special allegation. According to his lawyer, Atty. Jay Arriola, if the government intends to charge Torre with negligent homicide, a new indictment or a preliminary hearing would be needed and the government must present the new charges to a grand jury including evidence that was not suppressed by the Supreme Court.

“Actually, as a practical matter, he hasn’t been charged yet with the new offenses because we have to decide the motion to amend and whether or not it’s going to go to the grand jury. Technically, as it stands now, the convictions were vacated and he remains under the court’s jurisdiction. Our position is that the bail condition should be modified,” Arriola said.

Torre was found guilty of negligent homicide and third-degree aggravated assault, both with a special allegation of possession or use of a deadly weapon. He was acquitted of murder, manslaughter, and second-degree aggravated assault. Winning his appeal in the Supreme Court, the convictions were overturned and the case was returned to trial court. With a second trial now in the works, Arriola says that the indictment against his client must be modified to avoid double jeopardy.

The Office of the Attorney General disagrees, arguing that the proposed indictment does not allege any new or different offenses, it simply modifies the degree of the charged offense in the initial indictment, reducing the charges of manslaughter to negligent homicide with the special allegation as a lesser included.

The AG contends that Torre’s rights will not be prejudiced by this change. The AG argued that a reduction of the charges and change to a lesser included do not substantially change the ability of the defense to offer evidence or prejudice the defendant. The AG also pointed out that the Supreme Court did not dismiss the case but instead vacated and remanded it back to the trial court.

Arriola argued that the language of the statute relative to indictments states that it can be amended at any time before a verdict, if not charged with new offenses. He says that Torre has the right to a grand jury indictment and that it’s not appropriate under the plain language of the statute to include an additional offense and a different offense in the indictment by amending it, stressing that the case is back to square one.

The court has taken both matters under advisement and will issue a decision in 30 days. The next hearing is set for Oct. 24.