Guam – Governor Eddie Calvo’s former spokesman and advisor Troy Torres has released another set of allegations this time that Lt. Governor Ray Tenorio’s deputy chief of staff essentially blackmailed senator Dennis Rodriguez Jr. in attempts to force him to vote in favor of the bill to raise taxes.

The governor’s office has responded to these claims saying these are “outright lies” from “an individual who is admitted to drug use, subject to an ongoing criminal investigation, and who continues to feed media with unconfirmed lies.”

Specifically, Torres is alleging that Lt. Governor Ray Tenorio’s deputy chief of staff Jadeen Tuncap told a known supporter of Sen. Dennis Rodriguez, Jr. to deliver a message on behalf of Gov. Calvo and Lt. Gov. Tenorio to tell Rodriguez to “vote for the governor’s (tax hike) bill, or Dave’s contract will never leave the governor’s desk.” Torres says this is in reference to Dave Cruz who is Rodriguez’s running mate. Cruz who was a classified teacher at GDOE had to switch to an unclassified or contracted position in order to run for Lt. Governor with Rodriguez. This is a requirement of the Mini Hatch Act.

Torres alleges that Tuncap was threatening to hold this contract hostage essentially preventing Cruz from running with Rodriguez until Senator Rodriguez voted for the tax increases. However, Rodriguez ultimately voted no on the tax increases and Torres claims that Rodriguez responded to these threats saying, “Tell her she’s out of her mind, and that I will be voting my conscience.”

Adelup’s current Director of Communications Oyoal Ngiririkl responded to these allegations with a statement saying this latest allegation from Troy Torres “moves from distortion to outright lies.” adding “this is an individual who is admitted to drug use, subject to an ongoing criminal investigation, and who continues to feed media with unconfirmed lies.”

Ngiririkl says instead that it was Senator Rodriguez who reached out to the governor for help with David Cruz’s contract, and that “the governor agreed to this, only after it went through the approval process of DOE and the Attorney General’s office.” She also says the factual timeline refutes Torres’ claims. She writes that:

* The governor signed the contract on March 8.

* The Rodriguez-Cruz camp made their official announcement to run for governor and lieutenant governor on March 10.

Governor Eddie Calvo himself called into the Mornings with Patti Show on Newstalk K57.

“If the media could see that hey if the Governor Calvo signed this thing and he signed the action before Dennis Rodriguez made a vote and by the way Dennis Rodriguez voted against the bill anyway, then those accusations are just false,” said Calvo.

The governor also pointed out his relation to Senator Rodriguez.

“His wife is my cousin so I’m gonna be seeing them the rest of my life as a family member. So, I would not endanger that by some sort of strong arm tactic,” said Governor Calvo.

Then Ngiririkl went on to write that “We ask that Sen. Rodriguez, for the record, state what role, paid or unpaid, Troy plays in his campaign and if none, that he ask his former campaign manager to stop using his good name and the good name of David Cruz to perpetuate lies about good people.”

The governor’s office is also asking that “media engaging in potentially defamatory reports from non-credible sources, to responsibly vet facts and consider sources prior to publishing stories of this nature.” 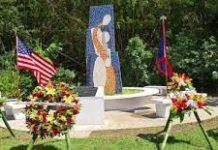 Alternate Site May be Available to Commemorate Instead of Manenggon Memorial