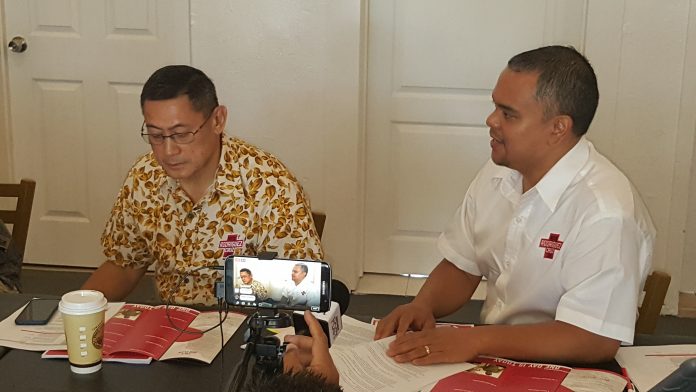 Guam – Sen. Dennis Rodriguez, Jr. and his running mate, retired U.S. Air Force Col. David Cruz, Jr., released their Democratic gubernatorial campaign platform, Into The Future, on Thursday. Media and stakeholders were called to the table at the “We Love Guam” headquarters for a talk on the platform’s contents.

The Rodriguez/Cruz campaign is playing their populist message to the hilt. Rodriguez even told reporters that, if elected, he’ll forego a presumed gubernatorial driver and still drive himself wherever he needs to go in his 22-year-old SUV.

“If my 1996 Ford Ranger is still working–which it’s still working now–I’m gonna drive that,” Rodriguez said. “It’s about being frugal, especially in times like this. How can we ask our people to sacrifice if we’re not gonna sacrifice ourselves?”

The Rodriguez/Cruz platform is anything but ordinary. In fact, the team calls it more than “just a platform”, but “our pledge—a real plan of action” for progressive reform aimed at uplifting “the poor, the marginalized, the voiceless, and those discarded by [the] elite and the establishment. This platform will turn the establishment on its head and build a middle class that will not just benefit from, but drive this economy.”

A quick peak inside the contents shows a team committed to austerity.

The Rodriguez/Cruz Into the Future Pledge & Platform

Rodriguez/Cruz is proposing a total reorganization of the Government of Guam. It would mean a consolidation of all departments and agencies down to nine. The campaign touts this as a way to bolster employee training and government modernization.

It’s a bold plan, by any measure. But is it too much, too soon for an island that has been slow to integrate modern systems of governance—ones that would clear backlogs like those that clog communication between the Dept. of Revenue and Taxation and the Dept. of Land Management, or that keep the local emergency-911 system behind the times, or that encourage the costlier aspects of patronage?

“Folks, this is gonna be a new government, a new administration that the people of Guam haven’t seen,” Rodriguez said.

Rodriguez and Cruz also pledge to recuse themselves from decisions that present conflicts of interest and appearances of impropriety. According to the last page of their pledge, “no direct decision of the governor will ever be made which shall influence or benefit him, his family, or his friends financially and personally.”