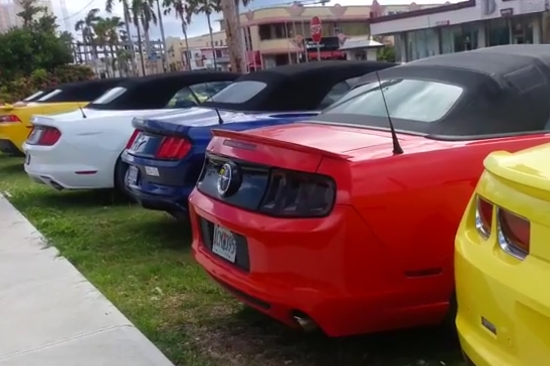 Many drivers on Saipan are frustrated with rental cars driven by tourists who do not follow the rules of the road.

Saipan – Shiny new cars on the street are catching the attention of residents these days, but not for the reason you’d think. In the past months Saipan residents have raised concerns over tourists renting cars and driving recklessly on the road and even beaches. On this Garapan street alone, there are 6 rental car companies.

All of them with similar criteria for tourists to rent cars: first, they must be at least 21 years old and second, they should have a drivers license from their country which is valid for 30 days during their visit.

One Saipan resident told PNC about her encounters with tourists while driving. Janine Nogis said, “We were on the beach and the kids were on the shore and one of those rental hummers drove up to the beach and tried to drive up to the sand bar. We had our kids out about 20 feet away and it was a real concern. It’s a safety concern.”

In another incident, a tourist parked in the middle of a traffic light to urinate on the sidewalk. This resident hopes that more regulations are put in place. Someone, she said, needs to be held accountable.

In a phone interview, Department of Public Safety Commissioner Robert Guerrero said: They [tourists] should comply with all of our traffic laws just like the residents on island. On the law enforcement side we do not distinguish between tourists or residents. The law is the law.”

The commissioner added that he has heard these concerns before and the department is working to address them. Other residents say that among foreign drivers behavior, parking in the middle of the road to take photos and driving in groups on grass and off the road are safety issues.

While some car rental managers and employees refused to comment on the issue after repeated questioning, one employer who has worked in the rental car business for over two decades openly spoke to PNC. The employee said, “Sometimes they are driving in the wrong way and sometimes they just park the car and someone breaks their window and steals their things.”

She described these customers, who happen to be mostly Asian, as “risky drivers.” She tells us that even though they brief the customers about safe driving and the rules of the road, violations still occur.