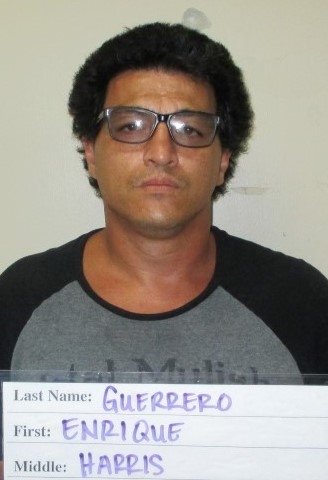 40-year-old Enrique Harris Guerrero was caught with marijuana, ice, and an unregistered rifle after police responded to a car crash.

Guam – At about midnight on Monday morning, Guam Police Department officers responded to a car crash in Tamuning at the intersection on Gov. Carlos Camacho Rd. Two occupants of a 2011 Toyota Tacoma were hit when a 1999 Toyota Forerunner ran a traffic light. According to a magistrate report, the two victims sustained injuries from the crash and were transported by medics.

The operator of the Forerunner, documents say, was identified as 40-year-old Enrique Harris Guerrero. One of the officers asked Guerrero about a glass pipe that was in the vehicle. Guerrero replied that he “smoked marijuana to help with his seizures.” But an unregistered rifle was also found in the trunk, which prompted officers to do a full search of the vehicle. The report states that officers found more unregistered pistols and 200 rounds of ammunition, and a black pouch containing plastic bags with a crystalline substance inside, which later tested positive for amphetamines.