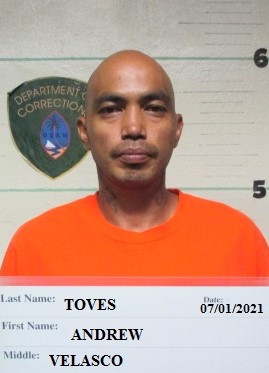 A man was arrested last week in relation to a stolen vehicle case last May.

Andrew Velasco Toves was arrested on the following charges: theft by receiving; assault against a police officer; and fraudulent use of a license plate.

According to the magistrate’s complaint, on May 24 of this year, an individual in Yona discovered that his 1999 Green Mazda Miata had the wires to the car’s ignition cut and left dangling.

The following morning, the victim went to photograph the damage but discovered that the car was missing. Police were called and that same morning. GPD issued an All Points Bulletin, or APB, for the stolen vehicle.

The following day, at around 2:20 pm, police officers were patrolling around Route 17 and Route 4A in Yona when an officer observed a speeding Green Mazda Miata that matched the description of the stolen vehicle.

A traffic pullover was then conducted followed by dispatch informing the officer that the license plate did not match the vehicle.

According to court documents,  the officer noticed a female exit from the driver’s side and an argument ensued between her and the male passenger.

The male passenger then proceeded to go to the driver’s side and proceeded to attempt to escape. The officer attempted to remove the male from the vehicle but had lost his balance and fell. He was then dragged until he let go of the driver.

The female who had been left behind identified the male driver to be Andrew Toves. Toves had picked up the girl at her request. When she noticed that the car was standard gear, she asked to drive it.

Toves had instructed the female to continue driving during the traffic pullover.

Police then issued an APB for Toves that same day.

Last week Thursday, Toves was a passenger in a car that had been stopped for suspicious activity.

According to the magistrate’s report, Toves gave a false first name to the officer at first but one of the passengers had identified him as Toves.

Toves has denied being involved in a car theft but admitted that he knew the female who had been left behind in the previous incident.

Toves has had no previous record with the Department of Corrections.

The magistrate’s complaint states that there is probable cause to charge Toves with the following:

Theft by receiving property as a 2nd-degree felony;

Assault against a police officer as a 3rd-degree felony; and

And fraudulent use of a license plate as a 3rd-degree felony.