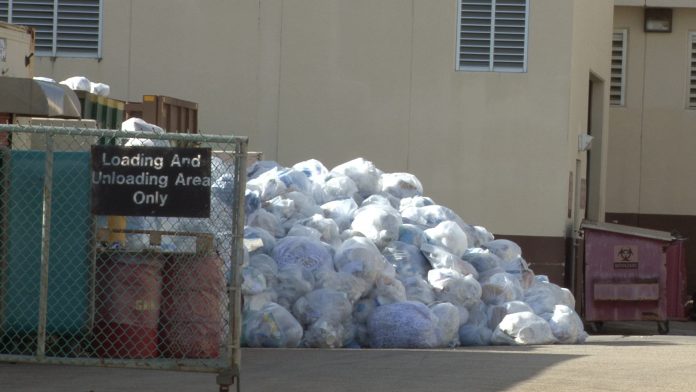 GMH Spokesperson June Perez says a check was cut today to one of their trash vendors.

Guam – Last month the Guam Memorial Hospital nearly had their water and power cut off, now their trash is piling up as the hospital’s debt continues to climb to new heights of nearly $26 million.

This is despite a recently empaneled GMH advisory team identifying cost-saving measures at the hospital. GMH Spokesperson June Perez confirmed the amount today.

On January 22nd, the outstanding vendor payables for GMH was at $24 million. Today, Perez says, it’s $25.9 million. Of that amount, she says $3.4 million is owed to the GovGuam Retirement Fund. Perez says GMH owed one of their solid waste vendors about $13,000, but she says GMH delivered a check to them today.

Adelup and the utility companies were able to come to an agreement which averted a power and water crisis at the hospital. GMH agreed to pay half of their outstanding debt immediately with the remainder being paid over a three month period.

Just last week, the Governor’s Office announced that the GMH Advisory Team identified some cost-saving measures with the hospital’s old billing system that will save them $50,000 a month. Meanwhile, the hospital continues to accrue millions of dollars in outstanding vendor payables each month that results in vendors threatening or cut off GMH’s credit line.

The hospital’s debt has crept up to alarming levels over the last two years when a $25 million dollar loan was taken out to pay down their debt.

And despite numerous and even some creative attempts to provide government funding for the hospital, GMH’s debt continues to climb.