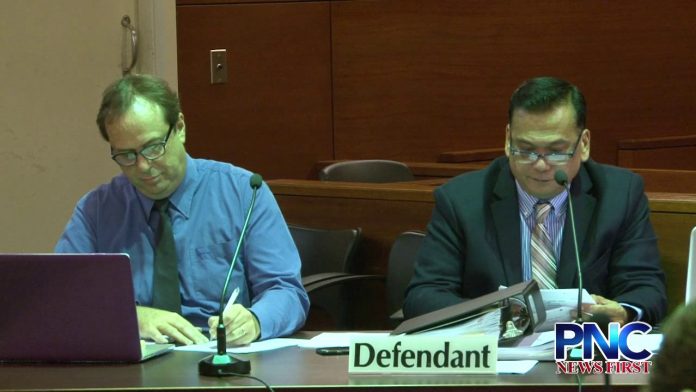 The defense presented its case in chief.

Guam – Judge Vernon Perez denied a motion for acquittal in the sex abuse trial of University of Guam Professor Michael Ehlert. Meanwhile, after 17 witnesses taking the stand for the government to testify against the UOG Professor, today marked the beginning of testimonies for the defendant.

“Dirty White Professor.” That is what Defense Attorney Jay Arriola believes the prosecution has portrayed of his client Michael Ehlert’s image. This is a portrayal the defense intends to strike down with the first witness sharing his testimony on Ehlert’s character, professionalism, and of course, his “Stroup Parties.”

First to the stand was Regis Reyes who has taken five to six classes instructed by Ehlert from 1999 to 2009 at the University of Guam. It was during this time that Reyes recalls attending a Stroup Party at Ehlert’s Ipan residence in May of 2009.

This is the same party victim R.H. alleges she was raped by Ehlert. In Reyes’ testimony, he affirmed that Ehlert carried himself professionally within the classroom, citing a friendship they developed during his time as Ehlert’s research assistant. Reyes added that his attendance to the 2009 Stroup party in question was only one out of about five parties he attended at Ehlert’s residence.

Reyes asserted that at this particular party, he did not leave until 6 the following morning as he was too inebriated to drive, placing him at the residence when the alleged rape of R.H. occurred.

R.H. had previously testified for the prosecution that although she doesn’t remember how she ended up in the bedroom, she does recall Ehlert pinning her down and placing his genitals in her face before she believes he raped her.

“And at any time that night, did you hear anyone cry out for help? Or as if anyone was being hurt?” Arriola questioned Reyes.

“No I did not. No distress screams just laughing,” explained Reyes.

The defense moved on to next the Stroup Party in question in November of 2014, where it is alleged that Elhert sexually assaulted two female students.

The first claim accuses Ehlert of grouping F.R. while she attempted to piggy back the second victim H.R. out of the water. In F.R.’s testimony, she stated she felt a finger go into the back of her shorts through the leg opening, and up under her panty.

Next to the stand was Ray Chaco. Unlike other witnesses in this case, Chaco was not a student at UOG; he is the boyfriend of another key witness. He confirmed that he was S.R.’s plus one to the 2014 Stroup Party. It was there he remembered walking down to the beachside where the assault allegedly took place. In Chaco’s testimony, he recalled hearing a scream.

Arriola asked, “Did you ever hear anyone scream out loud? What did you hear?”

In response Chaco stated, “Yes, she said, ‘Who the [expletive] touched my butt?'”

Chaco however places Ehlert about five feet away from the victims, stating that two other male individuals were next to victim H.R. and F.R. at the time of the scream. Chaco further recalled taking F.R. and his girlfriend to Mobil for ice cream. Chaco indicated that F.R. “believed it was Ehlert but not sure–just said someone touched her butt.”

The next witness to testify, Tamara Manglona, created some contention between US Attorney General Matt Heibel and Defense Attorney Jay Arriola, as Heibel argued that her testimony would be improper character evidence and hearsay. Arriola stated that Manglona, who also attended the 2014 party and was a psychology student, would be able to testify on what she saw and did not see as well as attest to the demeanors of F.R. and H.R.

So what did Manglona have to say?

When questioned by Arriola about the appearance of flirting, Manglona responded that’s the way she perceived it, adding, “Like I mentioned, facial expressions, very smiley and from what I could hear.”

Alleging that she witnessed H.R. and K.P. being flirtatious with Ehlert in the hallway of the psychology building prior to the Stroup party, Manglona also attested to Ehlert’s professionalism within the classroom and school setting as well as his demeanor at the Stroup parties.

Trial will resume on Thursday.