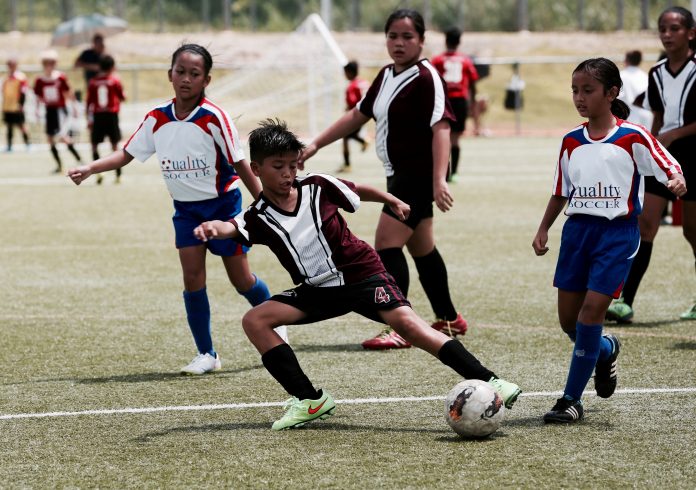 “We tried really hard to win and it feels good that we were able to defeat my sister’s team in the end!”

HARMON, GUAM – Each Saturday during the Triple J Auto Group Robbie Webber Youth Soccer League is a fun, all-day family affair for the Gumataotao family of Santa Rita, but Week 4 play was all about lighthearted sibling rivalry.

Kelsi Gumataotao, 9, and the Guam Shipyard Wolverines Red were set to take on the Wolverines Blue, the team her 8-year-old brother Timothy plays for, in the league’s U10A division at the Guam Football Association National Training Center.

“We were both trying to win (Saturday) to see who would get a prize,” said Kelsi Gumataotao, a student at Harry S. Truman Elementary School. “If my team won, I would get Shopkins and if my brother’s team won, he would get a new soccer ball.”

Fortunately for Timothy Gumataotao, he’ll keep bragging rights until their next fixture as the Wolverines Blue edged their Red counterparts by one goal.

“We tried really hard to win and it feels good that we were able to defeat my sister’s team in the end,” he said.

The pair, only 15 months apart, have played on the same team in previous youth league seasons, but elected to play on separate teams this season.

In U17A division action, Wings Red defeated the Wolverines 9-0 with five goals from Jordan Jasmin, two from Derek Okuhama, and one each from Hinako Ito and Inochi Recella. The Islanders Betde defeated the Cobras 7-4 with four goals from Tevin Pangelinan and one each from Joerowayne Manalo, Leon Bamba and Kyle Perez. Phil Jardaleza scored twice for the Cobras and Vance Camacho and Seth Surber also scored. Wings Black edged Quality 4-3 with two goals from Tyler Presto and one each from Bruno Reyes and Takumi Odell. Sam Larkin, Camden Camacho, and Jason Kim scored for Quality. The Strykers defeated the Sidekick SC with goals from Xavier Naputi, Clayton Mitchell, Vince Cruz, Jacob Herring, Ethan Elwell, and Aidan Dickson. Giancarlo Abril scored for the Sidekick SC.