The Manha Cowboys, Metgot Raiders and the Matua Steelers all advanced to the Championship games in today’s Triple J. Auto Group GNYFF Semifinals #2 held at Eagle Field in Mangilao.  All three teams will not face the Angels, who won all their divisions in yesterdays Semifinals. 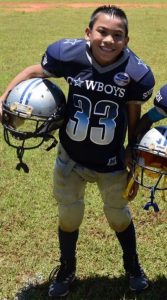 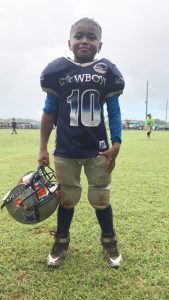 Raiders in a tight contest got by the Steelers 8-6.   Steelers were leading 6-0 with under 3 minutes remaining in the game, when Raiders Aiden Palacios intercepted a Steeler pass and returned it 60yds to the Steelers 2 yd line.  Teammate Tristan Burgos then finished it off with a 2yd TD run to knot it up at 6-6.  A John Joseph Cabrera 2pt PAT Kick would give the Raiders the lead for good and the victory.

Steelers defeated the Raiders 30-16 .  Raiders jumped out early with a 16-0 lead in the 1st Qt with TD’s from Kyle Potter and J Guzman.  The Steelers would tie the game in the 2nd Qtr with two TD receptions.  The first from QB Lance Muna Aguon to Kekoa Gamboa.  The second would be a Steeler Trick play as running back Adin Lumba, off a fake run, would connect with Gamboa for his 2nd TD in the 1st half.  The Steelers would produce 2 Defensive T’Ds in the 2nd half from Steelers Dasen Ignacio and Pierce Pangelinan to get the win and a trip to the title game against the Matua Angels.

The Triple J GNYFF Championships will be held on Sat November 3rd Location and times to be announced later this week.