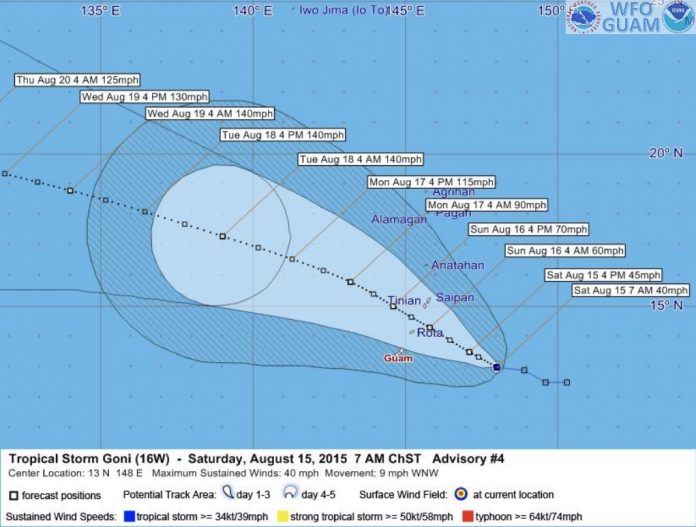 Guam – A Tropical Storm warning is now in effect for Rota, Tinian, Saipan which means damaging winds of 39 mph or more are likely within 24 hours.

A Typhoon Watch also remains in effect for Tinian and Saipan. Typhoon conditions including destructive winds of 74 mph or more are possible within 36 hours.

A Tropical Storm watch remains in effect for Guam which means tropical storm conditions including damaging winds of 39 mph or more are expected within 36 hours.

According to the National Weather Service, as of 7 this morning, the center of Tropical Storm “Goni”, which is the Korean word for swan, was located near latitude 13.2 north and longitude 147.6 east. That’s about 190 miles east of Guam.

Goni is drifting west-northwest at 9 mph and is expected to gradually turn toward the northwest today with little change in forward speed.

NWS says the track would bring Goni between Rota and Tinian on Sunday morning. However, any delay on the northwest turn would take it closer to Guam and Rota instead.

Maximum sustained winds have increased to 40 mph. Tropical Storm Goni is expected to intensify over the next few days, possibly becoming a typhoon late Sunday night or Monday morning.