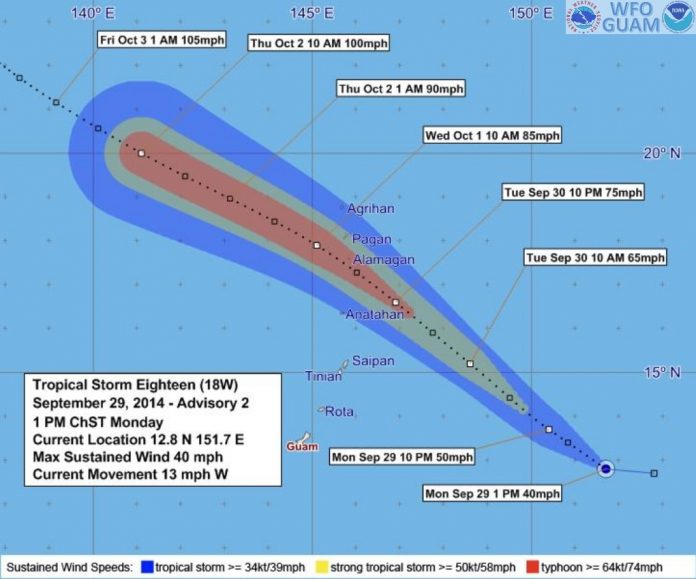 Guam – There is a tropical storm brewing out there Southeast of Guam but the National Weather Service says it will likely pass far North of Guam and even Saipan. Currently there is a typhoon watch issued for the far Northern Mariana islands including Pagan and Alamagan.

“Right now all the model guidance suggest it should move to the Northwest. Here is the latest from the Joint Typhoon warning center and here’s the Marianas Chuuk in the center the forecast takes it well North of Saipan up near the islands of Pagan Agrigran up there in the far Northern Marianas that would be early Wednesday morning,” said NWS forecaster Mike Middlebrook. Winds are currently at 30 miles per hour and it’s forecast to become a typhoon by late Wednesday or early Thursday morning but by then it should be out of the Marianas chain.

“We’re not in a watch or anything here on Guam but I would just say we should kind of pay attention for another day or so,” said Middlebrook. There is however a tropical storm watch for Tinian and Saipan and a typhoon watch for the far Northern Marianas including Pagan and Alamagan.

So if it moves as currently forecast what does this mean for Guam? “It really doesn’t mean very much we could get some showers later winds will switch back to Southwest it might be a little bit gusty in some of the showers and really no real adverse impact unless it turns to a more westerly track. If it does that then we might have to prepare for tropical storm conditions,” said Middlebrook. If it does begin to head closer to Guam it’s not expected to be any stronger than a tropical storm.