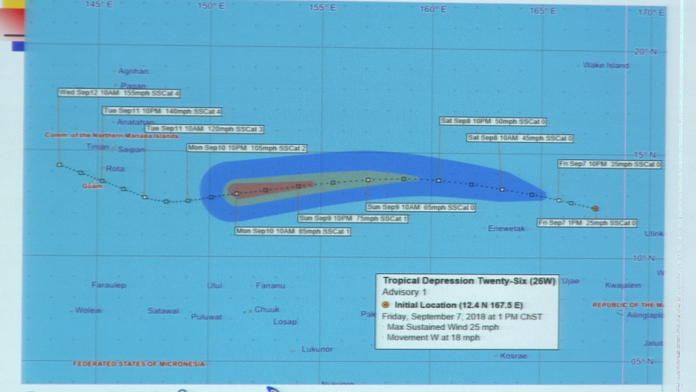 Guam – Guam and the rest of the Marianas could get knocked down with the worst typhoon to hit us since 2002’s Pongsona possibly by Tuesday night.

That’s the word from the National Weather Service. Good news, it’s still far away so we have time to prepare; bad news, it may bring with it winds of up to 198 miles an hour.

“Tuesday does not look like a good day for us. Based on this current track we’re gonna have a rough 9/11,” said Landon Aydlett, meteorologist with the National Weather Service, who gave a heavy weather briefing presentation today at the Office of Civil Defense.

If current models stay on the track they’re on now, we’re looking at a potential direct hit by Tuesday night, September 11 or a hit within the Mariana Region. And Meteorologist Landon Aydlett explains models have been pretty steady, unlike previous storms that have passed by us earlier in the year.

“The models have been very consistent sending this our way. Unlike previous tropical cyclones we’ve had in the region–Tropical Storm Maria and Cimarron in the last couple months, they developed closer to Guam so they were very weak. They were in the formative stage when they were near us so the paths were erratic. This one is well to our east, that’s the big concern we have,” Aydlett explains.

Right now, with the storm well east of us and in its early stages, it’s still considered tropical depression 26W. But by tonight, it will get a name: Tropical Storm Mangkhut—named after the mangosteen fruit from Thailand.

“We have a lot of distance and that is the bad news, we have a lot of time for this thing to really consolidate, get its act together and possibly rapidly intensify within the next few days. Current movement is toward the west at 18 miles per hour. We expect this forward motion to continue with a slight decrease over the next couple of days,” noted Aydlett.

The current closest point of approach is Tuesday night at around midnight. Aydlett says we could see a category 3 or category 4 storm come our way and if the storm intensifies rapidly, maybe even a category 5–something we haven’t seen since 2002.

Category 3 damage is defined as sustained winds of 111 to 129 mph with much higher gusts that could cause severe damage to wood structures and total destruction of structures made of light material.

“Category 4 damage, if we have more intensification in the next few days we could be dealing with a category 4 intensity storm. Sustained winds of 130 to 156 mph, gusts up to 165 or almost 200 mph wind gusts, total destruction of structures made of light materials, extensive damage to wooden structures, deadly rip currents and coastal flooding,” he adds.

Aydlett says we will begin to see some intense rain Monday with heavier winds of at least 39 miles an hour by Tuesday morning. The strongest winds, if the tracking stays current, will come Tuesday night.

“We could see more rapid intensification. That would be bad for us. We could be dealing with stronger than category 4 storm. Erratic movement is always possible but we don’t expect it at this point because the forecast track has been steady for the last several days in the models,” he noted.

The Governor’s Office says, in an abundance of caution, FEMA has been dispatched to Guam and representatives are now on their way here.

The last major typhoon to directly hit the island was in 2002 with Supertyphoon Pongsona.