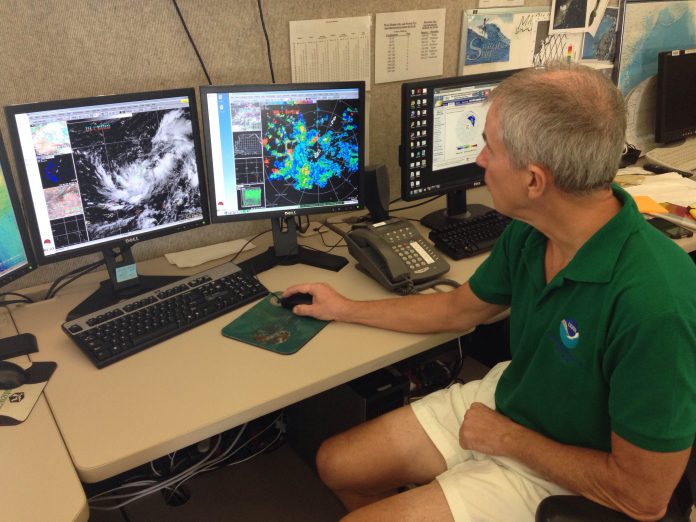 Guam – Expect cloudy, scattered showers and thunderstorms today and for the rest of the week.

There is a tropical disturbance about 200 miles southeast of Guam but according to National Weather Service Senior Meteorologist Carl McElroy, it is loosely organized and is developing in half the normal rate.
He explained, “We have a tropical disturbance about 215 miles southeast of Guam. It’s a pretty large system. Right now you see it’s loosely organized. You’ve got showers and thunderstorms but its elongated. There aren’t too many showers and thunderstorms close to the center so that means it’s not developing very quickly. I’ve been watching it for a few days, it’s been moving north-westward.”
The Joint Typhoon Warning Center issued a Tropical Cyclone Formation Alert but NWS says don’t expect anything just yet. Because it is such a large system, it is slowly developing.
McElroy said, “Being that it’s not expected to develop quickly, the main threat would be possible heavy rains from the rain bands as the system tracks farther north. We can expect 2 to 4 inches of rain but it will vary locally because the showers and thunderstorms are a hit and miss. You’ll get some rain bands in some areas and nothing in others.”
McElroy said from the looks of it, the system won’t be turning into a tropical storm, more or less, a typhoon in the next couple of days. He said the biggest threat would be heavy rain, gusty winds of 15 to 25 mph and possibly a high surf advisory.
The tropical disturbance will be passing over the island from North to South and NWS says it’s worth to keep an eye on.
If you are driving, be alert for ponding of water on roads and low visibility in heavy rainfall. If you see lightning or hear thunder, seek shelter indoors or below decks.