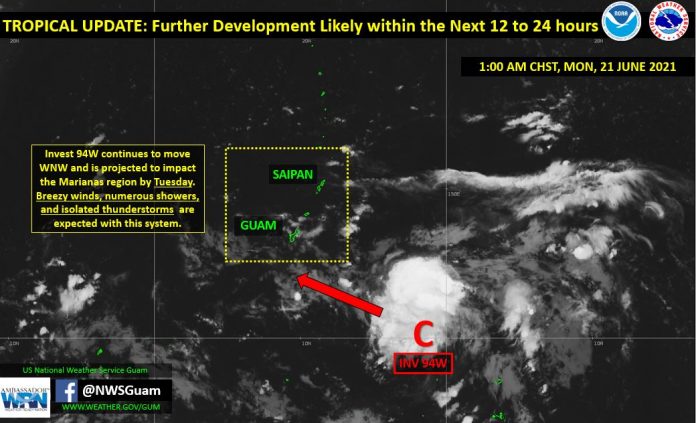 Invest 94W, the tropical disturbance that originated near Chuuk, continues to move west-northwest and further development is likely within the next 12 to 24 hours. Invest 94W is expected to bring heavier showers and isolated thunderstorms by Tuesday but it’s not likely to become a typhoon.

Although the circulation still appears unorganized, the National Weather Service reported on its Facebook page that the latest data available has increased its potential to intensify within 12 to 24 hours.

“This is a very asymmetric system. Some people will get a lot more weather while other areas may not. This could be a situation where Guam gets spared and Rota gets more showers and gusty winds, even though it’s passing south of us. That’s the tricky nature of these developing disturbances,” NWS Guam Meteorologist Landon Aydlett said in an interview with NewsTalk K-57’s Patti Arroyo.

Aydlett forecasts that there will be a lot of showers tomorrow.

“So Tuesday looks like there’s gonna be a lot of showers throughout the day. It won’t be a washout, but it will be periods of off and on, moderate to heavy showers. Isolated thunderstorms, and gusty winds. We’re looking at a tent and canopy type of scenario. So, if you have tents and tarps and canopies put up, strap them down or pull them down and secure things. As far as shutters, this is not a typhoon shutter type of system. Absolutely,” Aydlett said.

He added that NWS Guam plans to do a Facebook live update on the NWS page later this afternoon.