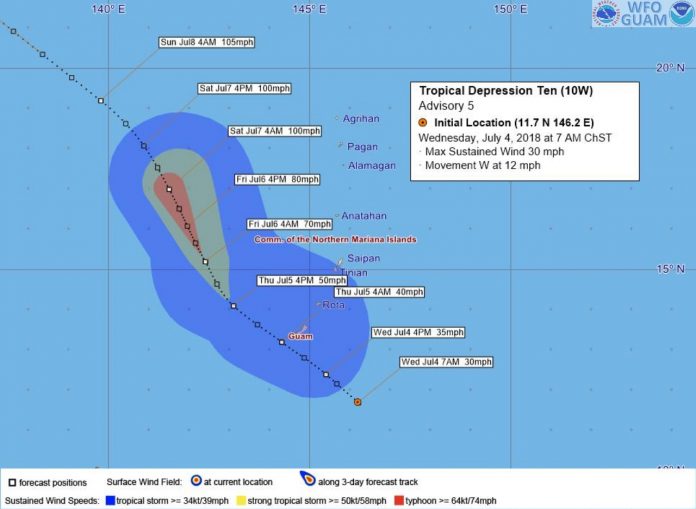 Guam – No fireworks expected for our Fourth of July this year due to serious weather conditions in our region.  A storm is brewing and is on its way to the Marianas, currently tracking West at 12 mph. The formation that has since been dubbed Tropical Storm 10W is anticipated to intensify through Thursday.

The tropical storm warning for Guam and Rota means storm conditions like heavy rainfall and damaging winds of 39 miles or more are anticipated to reach the area within 24 hours, however because of Guam’s closer proximity to the center of Tropical Storm 10 W, those weather conditions is expected as soon as tonight.

The tropical storm watch issued for Tinian and Saipan means similar storm conditions are also expected, however much later than of a storm warning. In fact, the National Weather Service is giving the two islands 24 to 36 hours before such intensifying weather will reach the area.

The center of Tropical Storm 10W has been located near Latitude 11.7 N and Longitude 146.2 E, currently moving W at 12 mph. However, it is anticipated to shift Northwestward with a decrease in forward speeds in the next 24 hours, which puts 10W on track over Guam or through the Rota Channel. Following its current track, weather conditions are also expected to intensify by tonight for Guam and Rota, and by Thursday for Tinian and Saipan.

Wednesday – Mostly cloudy with a 70% chance of showers and thunderstorms, which will increase tonight developing a 90% chance of rainfall. Breezy wind speeds from the East at 30 to 35 mph with gusts as high as 41 will maintain such speeds through tonight. High 84 low 78.

Thursday – Mostly cloudy with frequent showers and possible thunderstorms, as well as a 90% chance of rainfall. South winds are between 15 to 30 mph shifting more from the Southwest and increasing to 30-45 mph with gusts as high as 55 by tonight. High 85 low 78.

Friday – Mostly cloudy with scattered showers and thunderstorms with a 50% chance of rainfall. South winds are currently at 10 to 20 mph with gusts as high as 24. High 87 low 78.

Thursday – Mostly cloudy skies with Frequent showers will be coming in keeping a 90% chance of rainfall throughout the day. SSE winds will stay within 35 and 45 mph with gusts as high as 55. High 85 low 78.

Friday – Mostly cloudy with a 50% chance of scattered showers and thunderstorms. South Southeast winds will drop significantly between 10 and 20 mph with gusts as high as 26. High 86 low 78.

Several precautionary measures should be taken:

We will keep you updated as Tropical Storm 10W Progresses.