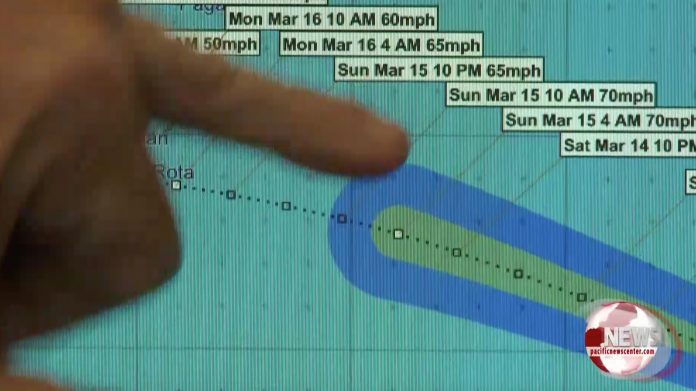 Current Forecast Has it Passing Between Guam & Rota

Guam – Tropical storm Bavi is in the Marshall Islands but National Weather Service forecasters say it is headed towards the Marianas. So how soon will it get here and how strong will it be when it get’s here? NWS Forecaster Carl McElroy spoke to PNC today about the latest tracking models on the tropical storm.

“It’s tropical storm Bavi its a Vietnamese name it was just named this morning by Japan and then the typhoon warning center put it on their warning,” said McElroy. Tropical storm Bavi is Southwest of Kwajelin in the Marshall islands and it’s head West Northwest which will take it to the Marianas in the next several days. “The latest warning has it coming into the Marianas by Monday or so and it would be as a strong tropical storm or minimal typhoon,” said McElroy.

Right now winds are at 40 miles per hour and they only expect winds to increase to about 70 miles per hour when it reaches the Marianas. The most recent track has it passing between Guam and Rota. However, it should be noted that it is way to early to know exactly where the storm will head and exactly how strong it will be. The storm is extremely far from Guam right now and the tiniest changes in it’s track today or tomorrow amount in huge changes by the time it reaches our area on Monday.

“It is so far away right now around 1600 miles so a slight change in speed that far away could make quite a difference exactly when and where it would pass through the Marianas,” said McElroy.

There are several factors that could prevent the storm from getting much stronger before it hits us. “The factors would be slightly cooler water out here in the wintertime and stronger wind shear. Wind shear is just winds that are blowing over the top of the system that tend to blow the tops of the clouds off and pull some of the heat out of the center of the system and keep it from intensifying,” said McElroy

However, that being said McElroy urges residents to prepare for the worst and hope for the best. Again although it’s only expected to be a tropical storm by the time it reaches the Marianas residents should always be prepared.