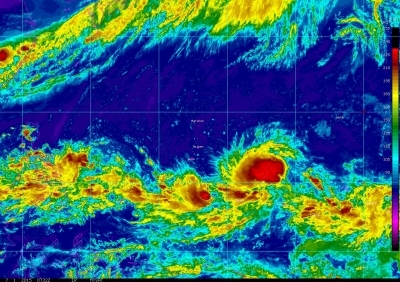 PNC was curious about how the storms receive their names and whether or not the Guam National Weather Forecast Office is responsible for the names of storms that hit in the Western North Pacific.

PNC spoke with Chip Guard, Warning Coordination Meterologist at the Guam National Weather Forecast Office. Chip explained that many of the names were once selected by Guam’s NWFO representatives and, in the past, had no specific protocol on how it was done.  Storms could have been named after pets, co-workers, or any given name that happened to make sense.

That changed in the 1990’s when the United Nations decided to take part.  Now, you may notice that typhoons are often named in different languages. For example, tropical storm Chan-Hom is also the name of a tree in Laos.

All countries in the Western North Pacific region submit a list of names that must first be approved and then added to the list of names that will rotate based on alphabetical order of country names.  For example, Cambodia’s name selection will be assigned to the storm first and as each storm occurs they will be named alphabetically until Vietnam is last.  The United Nations ends up comprising five lists from all the countries in the western north pacific region. More than one storm can carry the same name at some point in time since the entire list repeats in a rotation. That rotation will continue unless a name is retired and a new one is added.  Typically, the only way a name is retired is when it is a storm that caused severe damage or deaths; and even then, it must be approved first and then a new list of names will be submitted for consideration of which name will replace it.

So, the next time you raise an eyebrow, perk your curiosity, or wonder where a storm name originates, you can check the assigned list of names that are in rotation on the National Weather Service Central Pacific Hurricane Center website to find out which country had their turn in naming the storm.

See below for an example of the list of names for Tropical Storms of the Western North Pacific.  See if you can locate where the current tropical storm Chan-Hom is located on the list: