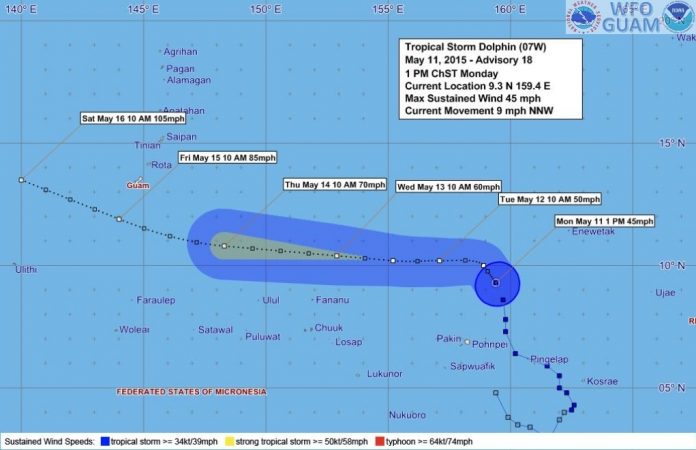 Guam – Tropical storm Dolphin is located 185 miles North Northeast of Pohnpei and is headed towards the general direction of Guam.

“The system’s had some general problems intensifying,” said National Weather Service forecaster Chip Guard adding, “Right now it’s still in the deep tropics. It’s affected Kosrae and Pingelap and Mokil between Kosrae and Ponhpei and now it’s affecting Pohnpei. In Pohnpei there’s a lot of downed limbs the power is out in Kolonia and in fact it’s out over the entire island and may not be restored on some parts of the island for 3 weeks to a month.”

The storm is moving North Northwest and will head towards Guam’s general direction. As it nears the Marianas it should intensify but not too much.”As it moves towards us, towards the West Northwest it probably will run into a more favorable environment but at this point it doesn’t look like that environment is going to be so favorable as to allow it to become a super typhoon,” said Guard. Tropical Storm Dolphin is expected to pass 40 miles south of Guam Friday afternoon with 90 mile per hour winds. “It does look like though we’re going to have detrimental weather Thursday night Friday time frame maybe into Saturday. Detrimental means tropical storm conditions a good bit of rain and windy conditions. Whether those are going to be damaging winds or destructive winds too early to tell right now,” said Guard.

Guard says the storm is too far away to forecast with great accuracy so he advises the public to pay attention to the development of this storm. For the very latest on Tropical Storm Dolphin log onto pacificnewscenter.com follow us on Twitter Facebook and Instagram and stay tuned to the stations of the Sorensen Media Group.