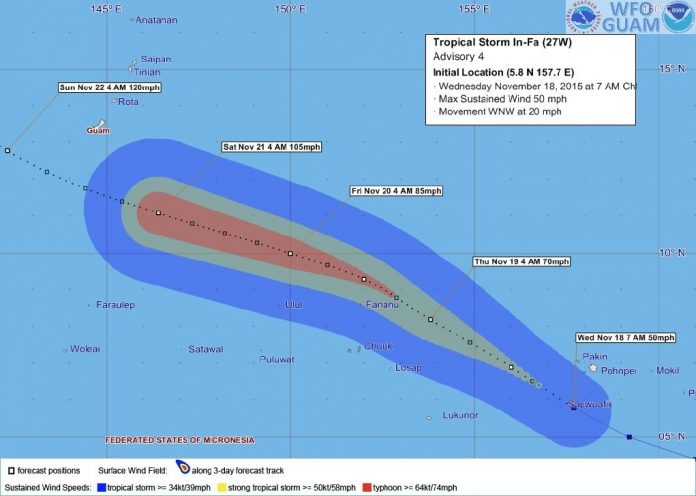 Guam – Tropical Storm In-Fa is intensifying, according to the National Weather Service’s 4th update on the strom from 8 AM (CHST) this morning. Currently in the south of Pohnpei, this circulation has Maximum Sustained Winds (MSW) that increase to 50 MPH.

In-fa is expected to continually gain strength over the next few days. Although the National Weather Service did not mention about the possibility of this system becoming a typhoon in its latest update, increase of about 24 MPH in its MSW from now will make In-fa a category 1 typhoon. However, it is hard to predict how In-fa will turn out to be, as over the past few days computer models were not in good agreement with In-fa’s development and future tracks.

As of 7 AM, In-Fa was located around 5.8N 157.7E, or about 22 miles east-southeast of Sapwuahfik, Pohnpei, and about 1,040 miles southeast of Guam and Saipan. As expected this circulation shifted its direction towards west-northwest, and is moving faster at 20 MPH compared to last night.

Regarding the future tracks, the Weather Service writes, “Tropical storm In-Fa is expected to continue on this track with a gradual decrease in forward speed through Thursday…then turn slightly more to the west Thursday Night and Friday.” This forecast track will bring the storm further south of Guam compared to previous forecast tracks since advisory #1, but the residents are advised to closely monitor the progress of this circulation.

“Winds in the Marianas from In-Fa will be very sensitive to slight changes from the current forecast track…which would likely bring low-end tropical storm force winds to Guam over the weekend. But a slight deviation south would result in significantly less wind…while a slight northward shift could bring much stronger winds to all the Marianas… possibly even typhoon force,” NWS explains in this morning’s discussion.

Currently, there are no typhoon related watches or warnings issued for the Marianas; Homeland Security also did not upgrade the Condition of Readiness from the usual of level 4. However the National Weather Service issued a Small Craft Advisory for the Marianas until 6 PM Sunday, and High Wind Advisory for the Guam International Airport in effect until 7PM tonight.

YOU CAN READ MORE ABOUT TROPICAL DEPRESSION 27W FROM NWS