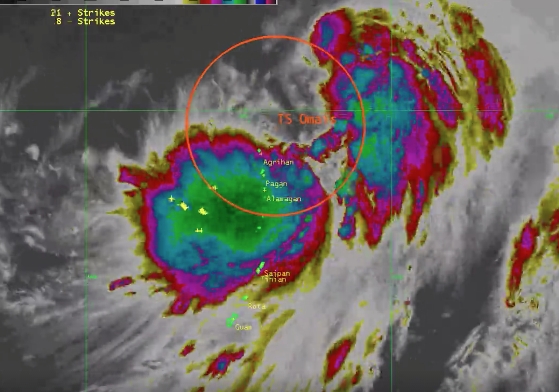 But that doesn’t mean that you shouldn’t expect a lot of rain in the next couple of days.

Guam – The monsoon depression has been upgraded to Tropical Storm Omais. However, there are no tropical storm or typhoon watches or warnings in effect for Guam or the CNMI. Omais will continue to move away from the Mariana Islands.

According to the National Weather Service, the tropical storm remains very disorganized with heavy showers and thunderstorms. Heaviest weather remains near and just north of Saipan and over Anatahan, Alamagan and Pagan. NWS says the system is still expected to continue to slowly develop and drift to the Northwest over the next few days.

West winds have increased over the Marianas. Higher gust to 35 mph are possible especially near the heavier showers. These winds will persist through at least Friday night as the disturbance continues to further develop. However, no damaging winds are expected.

NWS also issued a small craft advisory as winds and seas are hazardous. Seas have increased to around 10 feet near Tinian and Saipan.