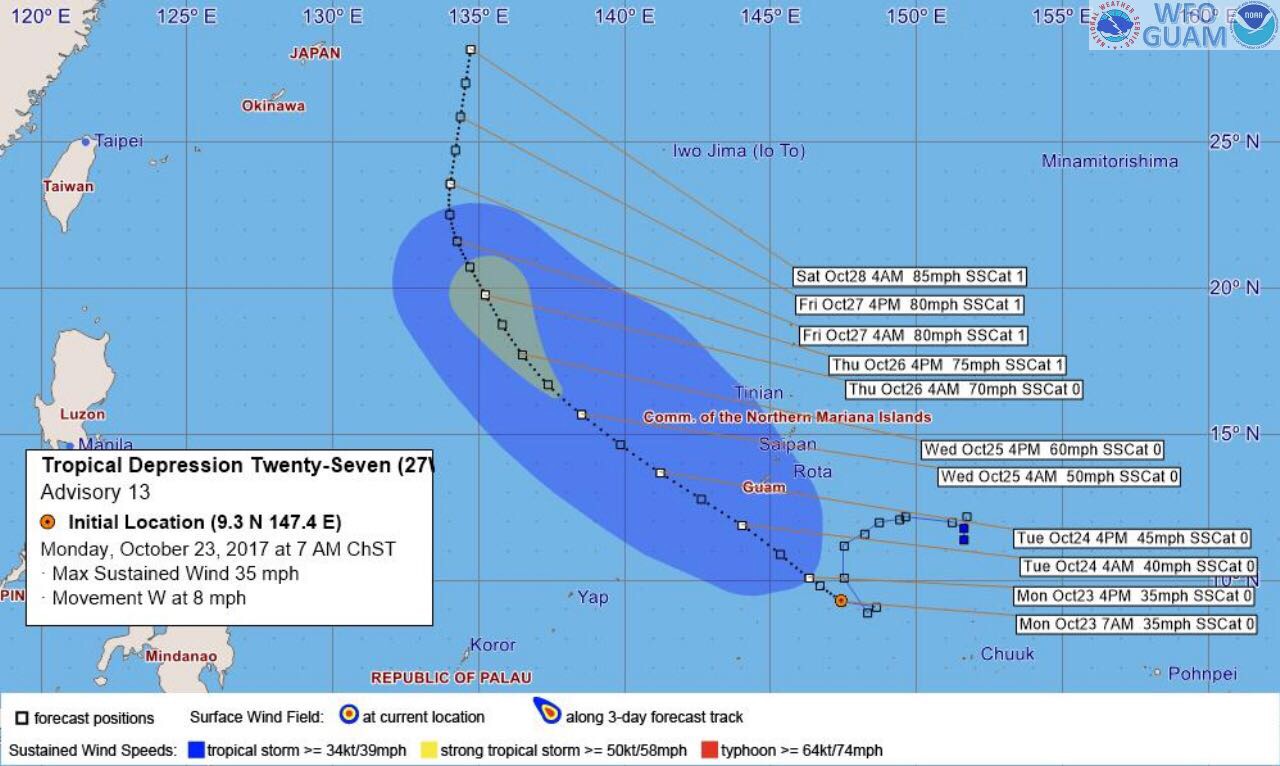 There is a tropical storm watch in effect for Guam and Rota but no warnings yet as of the latest update from the Guam Office of Civil Defense. The tropical depression is forecast to pass South of Guam on Tuesday but this forecast track could change.

Guam – Tropical depression 27W is currently forecast to pass South of Guam on Tuesday but the National Weather Service warns that there is still a lot of uncertainty with this forecast.

With the current track, 27W may have wind speeds of 45 mph by the time it passes Guam.

The current forecast track anticipates Tropical Depression 27W passing south of Guam on Tuesday. Keep in mind, there is still much uncertainty on how close the system will pass to Guam or locations in Chuuk state so the system is being monitored closely for any changes in motion or intensity.

Due to the uncertainty of exactly how close to Guam 27W will pass, it is advised to take basic precautionary actions now. To be prepared for any scenario with 27W, residents and visitors are advised to:

A high surf warning is in effect for Guam, Rota, Tinian, and Saipan until 6 p.m. this evening along west facing reefs. A high surf warning indicates that dangerous, battering waves will pound the shoreline, resulting in life-threatening conditions.  For west facing reefs, dangerous surf of 12 to 15 feet will continue through the day. Minor coastal inundation around 1 to 2 feet is possible around times of high tide. Although surf will diminish, it will remain hazardous through Wednesday.

Residents and visitors are advised to avoid venturing out on exposed reefs and beaches, especially those facing north, south and west, as rip currents will be life-threatening.

The Offices of Guam Homeland Security and Civil Defense (GHS/OCD) remind all residents and visitors to practice extreme caution if traveling in these conditions or if near the ocean.