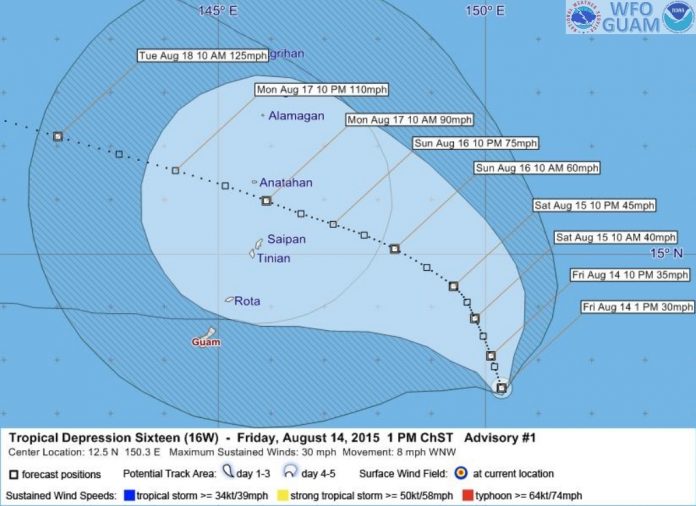 A tropical depression has formed 355 miles east Southeast of Guam. It could become a typhoon by this weekend when it passes through the Marianas. It is expected to pass North of Saipan closer to Anatahan which is far North of Guam.

Guam – The National Weather Service hass issued a tropical storm watch for Guam and Rota and a typhoon watch for Tinian and Saipan.

This means that Guam and Rota could experience tropical storm strength winds within 48 hours. It also means that Tinian and Saipan could experience typhoon strength winds within 48 hours. However, as of right now the system is just a tropical depression. It has been labeled as tropical depression 16W. It’s maximum sustained winds are at 30 miles per hour. It could become a tropical storm by Saturday afternoon and a typhoon by Sunday night. It is expected to pass through the Marianas North of Saipan closer to Anatahan by Sunday night or early Monday morning with typhoon strength winds. Guam is the southernmost island in the Marianas chain followed by Rota, Tinian, Saipan and Anatahan.