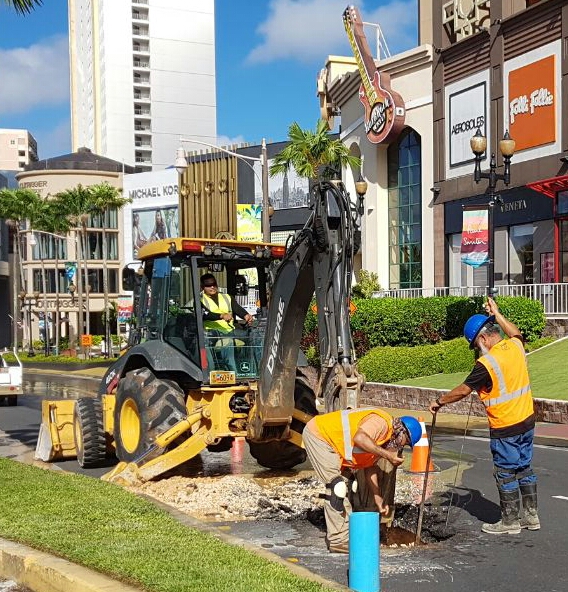 Guam – Clamped down, patched over, and all mopped up! A major traffic artery in the Pleasure Island district of Tumon is finally dry. This comes after a full fortnight of fresh-flowing water bubbling up from a couple of subterranean waterlines and straight into the street.

After issuing an emergency lane closure and warning drivers to slow down on San Vitores Road, by 8:00 a.m. Wednesday, Guam Waterworks Authority had sent at least six men, a backhoe, and a pump truck to repair the last of the freshwater leaks rolling downhill the past two weeks.

GWA General Manager Miguel Bordallo had already suspected that a timer-fed irrigation line had been damaged between The Plaza Shopping Center and DFS T-Galleria. Bordallo thought the busted line might be a GVB account. Intermittent sprinklers are timed to water the grass adorning Tumon Village roadway medians and can be seen in action before dawn. So, overworked, malfunctioning irrigation piping is possible.

Once they were all blocked off and squared away for safety on the road, the team backhoed straight through the non-skid surface and into a drenched coral base core. One man operated the scoop while another plumbed the depths of the water-filled crater. A third worker appeared to hold a brass coupling device, the kind that might be used to replace a damaged section of conduit by fitting two stable pipe ends together.

The crew was slated to finish up and open the road by 3:30 Wednesday afternoon, but completed the task hours ahead of schedule. PNC revisited the site to check progress at 1:00 p.m. And the news team noticed that the biggest of several holes that had been punched through the road and purportedly straight into a separate water pipe was finally patched over with fresh black asphalt. It had been left unrepaired for at least two weeks.

GWA has yet to confirm with PNC whether the culprit for the punch-holes is a construction crew that’s been installing electrical upgrades for the government just downslope from the leak sources.