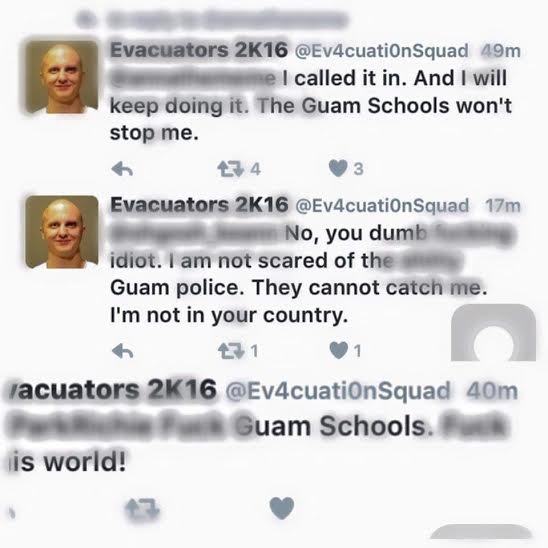 “I’m not scared of the Guam police. They can’t catch me. I’m not in your country.” – Evacuators2K16

The trend has been written bomb threats on various walls within school campuses however today that trend changed slightly as at least three of the 8 threats were called in. In addition to this an account on twitter called Evacuators2k16 is taking credit for calling in the bomb threats to Okkodo, JFK, and Inarajan.

It was one bomb threat after another at various local schools in the past couple of weeks. However, there seems to be a new trend this week: multiple bomb threats at different schools in a day.

THS Principal Sophie Duenas says, “We got a picture of a teacher took at about 9:30 am threatening of a bomb threat for today.”

The all clear was given at 11 am and students were able to return to their classes. However, Principal Sophie Duenas says they will be taking security measures at the school. Duenas explains, “Well we have the writing of the student, we will be investigating through student sample works. It’s only going to mean something to students if they know there are consequences to this and I hope we follow through with it. We will follow protocol instructed by the Superintendent. We will implement mesh bags, tighten protocol and student activities will be limited. There will be major accountability of all our students.

However, someone new is taking responsibility for calling in threats to Okkodo, JFK and Inarajan Middle School. Guam Department of Education Acting Deputy Superintendent Chris Anderson confirms that all three of those bomb threats were called in and the suspect left an automated message.

A Twitter account named Evacuators2K16 has taken responsibility for calling in threats to Okkodo, JFK & Inarajan Middle School. This is different than the threats that have been written on walls. The Twitter account claims to be an international group made up of six adult individuals. One post claims one of the individuals is from Bosnia. The account is threatening to continue bomb threats and says “The Guam schools won’t stop me” and “I’m not scared of the Guam police. They can’t catch me. I’m not in your country.”