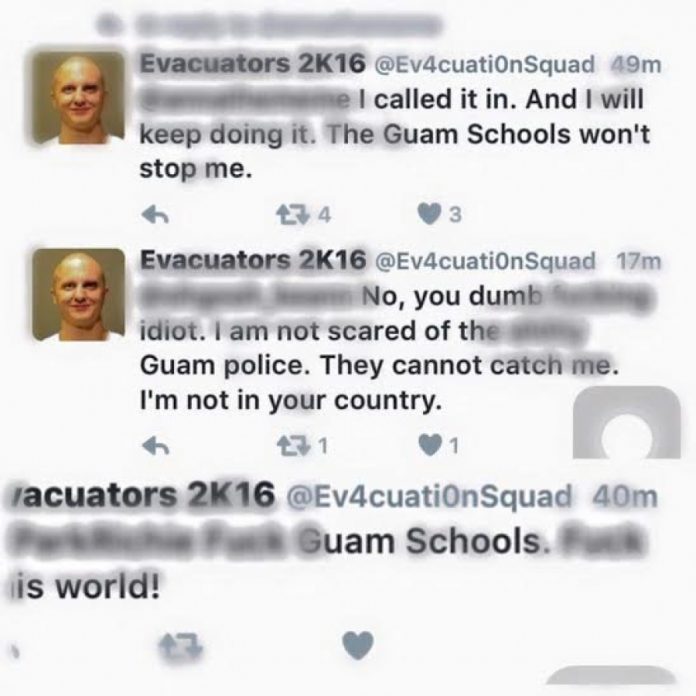 Homeland Security is tracking this Twitter account and they are working closely with the Mariana Regional Fusion.

Guam – Yesterday a Twitter account named Evacuators2k16 and with the handle ev4cuati0nsquad took credit for calling in the bomb threats to Okkodo, JFK, and Inarajan middle school. This morning the account had been suspended.

PNC was able to confirm with GDOE that those very three schools had their bomb threats phoned in with automated audio messages as opposed to written bomb threats that have been plaguing the island’s schools for the last few weeks. The Twitter account bragged writing “I’m not scared of the Guam police. They can’t catch me. I’m not in your country.” The evacuation squad also bragged that they were an international group made up of six adult individuals. One of those individuals claimed to be from Bosnia. They threatened to do more bomb threats to places on island and took credit for various bomb threats around the world and in the use. They posted an email saying people could email them to request for bomb threats to be phoned in anywhere. According to Jenna Gaminde Homeland Security is tracking this Twitter account and they are working closely with the Mariana Regional Fusion center on this matter. Again as of this morning that Twitter account had been suspended.