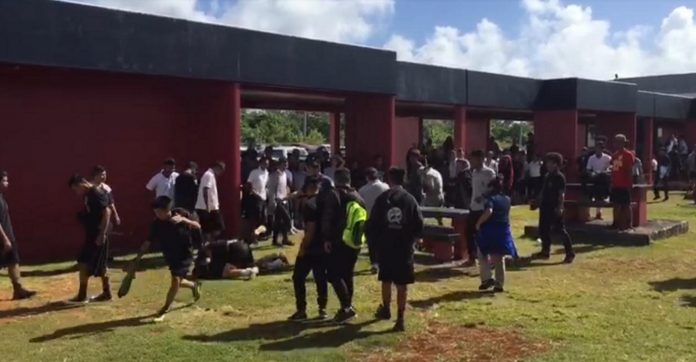 Multiple fights occurred during different times of the school day.

Guam – There’s a video circulating of a riot outbreak at Simon Sanchez High School earlier this week, but it was the use of pepper spray from a School Resource Officer that makes this schoolyard fight a little different.

A viewer submitted video shows two male students fighting in the courtyard of Simon Sanchez. According to Deputy Superintendent Chris Anderson, the fight quickly turned into a riot in a matter of seconds.

Pepper spray, which is commonly used by law enforcement as a deterrent and a form of crowd control in highly aggressive situations, is now under review as to whether it was the most appropriate response at the time.

“The (SRO’s) receive training on the judicious use of force. So, depending on the level of threat, they have to make that decision as to whether or not they’re gonna use their equipment and in this case it looks the SRO made the decision that pepper spray was necessary in order to control that situation,” Anderson explained.

But that’s not where it ended. Around lunchtime that same day, two female students are seen in another fight. But before the school day ended, a third fight apparently broke out at one of the school’s bus depots.

In the case of the riot, police were notified and in each instance, Anderson says the students were seen by a school health counselor. No serious injuries were reported.

“Rioting is a level three offense; it’s categorized as one of the most serious offenses that students can commit. First offense can range anywhere from a 3-10 day suspension,” he said.

Although three fights in one day is a little uncommon for one school, Anderson says the aggressive behavior is fairly common at this time of the school year.

“I don’t know if it’s stress. More so that it’s just mischievous behavior. Again, kids are getting antsy to get out and enjoy their summertime…young kids will be young kids, so they’ll do things that are consistent with their age group,” Anderson said.

But until school is officially out, Anderson says each campus will continue to do their best to work with kids to make better decisions.