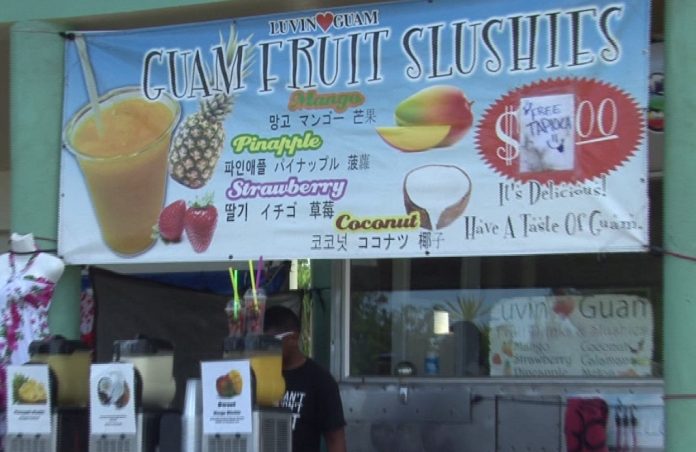 Guam – A tourist vendor at Two Lovers Point says she is facing discrimination from some independently contracted tour guides because of her race.

The vendor called “Luvin Guam,” is locally owned but the operator is half Korean.

PNC met with the owners who say they captured the harassment on camera.

After six years of what she calls a “deep and ugly discrimination”, Hyunhi Chong, the daughter of the family run business “Luvin Guam” at Two Lovers Point has finally had enough.

Hyunhi reached out to PNC to share her struggle as a half Korean business owner who is alleging mistreatment by some Korean tourist guides.

Hyunhi who is half Korean, fluent in Korean, and even advertises her beverage samples in Korean, is having a difficult time reaching out to Korean tourists.

She says this is because certain tour guides have actively re-directed tourists away from her stand, but when she finally confronted the man she alleges harassed her, she says a fight soon ensued.

“When I told him I was going to report him, he blew up in my face and was having an argument and when I grabbed my phone and tried to take a picture of him, he tried to back slap me and he managed to hit my phone and I wasn’t sure if I took the picture so I put it on video mode and tried to capture it on video and then he came towards me and hit my phone in hand with his rolled up paper. And this is not the first time this has happened, it’s been going on for a long, long time,” she said.

PNC obtained the video that Hyunhi described as the man allegedly harassing her.

To make matters worse, Hyunhi says the man in the video identified as a “Mr. Nam” who, according to the Guam Visitors Bureau is independently contracted by the the tourist group Blue Pacific Company, was not even wearing identification or a badge.

Although she has filed a police complaint, she says she still faces discrimination to this day.

But that’s not all, after she reported the man she says harassed her, Hyunhi says the wife of that man visited her the next day and sat right outside her business for three hours asking her to drop the charges.

Hyunhi says other Korean vendors started harassing her too, going so far as to “badmouth her product” saying that because it’s “not korean, the korean tourists should not even consider it.”

She told PNC that one tourist guide went so far as to pre-order drinks from another stand before the Korean tourists stepped off the bus to keep them from interacting with her.

Hyunhi says that although the atmosphere remains fierce, she told PNC that she “just wants it to be a free market and a fair market.”

PNC attempted to contact Blue Pacific Company, but did not get a response as of news time.

PNC also contacted the Guam Visitors Bureau’s President and CEO Nate Denight who says that they have received a report of the alleged harassment and are conducting their own investigation into the matter with their tour guide inspector.