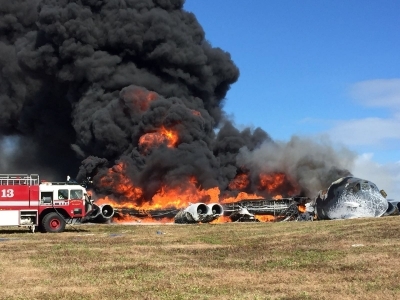 Guam – An environmental impact investigation into the B-52 crash incident back in may is being delayed.

With rainy season having arrived on Guam, there is concern that the consistent raining could carry jet fuel from the explosion into the groundwater. According to the Guam EPA, Andersen Air Force says there is quote ‘a limited environmental response at this time’ with regards to the jet fuel cleanup. According to GEPA, the last letter the agency received about the cleanup was a 2-page status report back in June. In this report, Andersen Air Force officials says they cleaned up 5,300 gallons of fuel from the crash site. Additionally, they laid a plastic sheet around the affected area to prevent further jet fuel from seeking into the ground. However, the amount of jet fuel that could have leaked into the ground after the intital explosion is unknown at this time. GEPA says they need to perform compliance sampling to find out exactly how much jet fuel from the explosion has reached the soil, something they do not currently know because of the delay in the investigation. GEPA says there is always a threat of groundwater contamination with a situation like this. Andersen air force officials tell PNC in a statement quote “initial assessments by Andersen Air Force Base Environmental specialists show no significant impact or danger to the local environment.” Andersen Air Force Base officials say it’s too early to discuss further details of the crash site. AAFB is considered a U.S. EPA ‘superfund site.’ According to U.S. EPA’s website, the superfund program is responsible for cleaning up some of the nations most contaminated land.