According to a magistrate’s complaint, 41-year-old Corina Lynn Blas and 43-year-old Raymond Torres Tedtaotao racked up charges on the bank card belonging to the victim who was kidnapped and raped.

The two are being charged with theft of property, fraudulent use of a credit card, identity theft and conspiracy to commit robbery.

Guam Police have already arrested Raymond Charles Tedtaotao Camacho, who they allege kidnapped the woman at the Crown Bakery parking lot at around 5 am on October 15. Police say Camacho ordered her to drive to a secluded area and raped and assaulted her. He allegedly demanded her to give him her debit card and PIN.

During questioning, Blas admits that she saw Camacho driving a Toyota Rav4, which she had not previously seen Camacho drive in the past. She says she witnessed Camacho and Tedtaotao exchange a credit card while at a game room.

Blas and Camacho then tried to use the debit card at an ATM but it didn’t work, court documents say. They then drove to a local gas station where the card eventually worked, Blas told police.

Police say the gas station purchase made with that debit card at the time matches the victim’s bank statements. The victim and her husband say the suspects racked up $847 in illegal charges with her debit card. 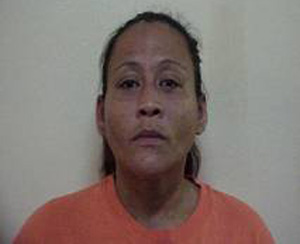