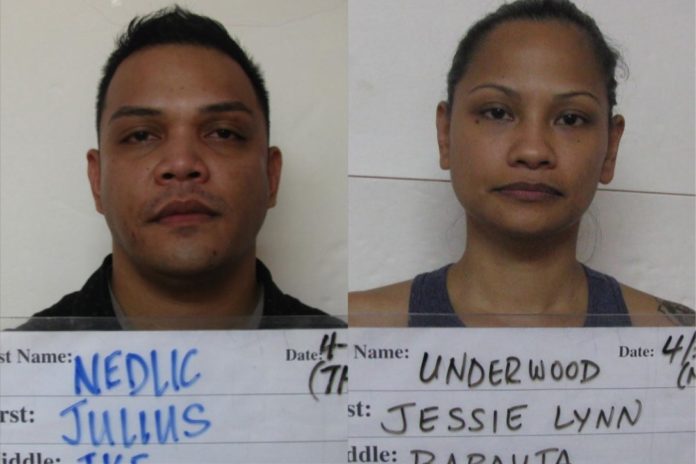 Guam – Two people Troy Torres alluded to in his press conference Monday night appeared in court today to answer to drug-related charges and one of them was also identified in a police report PNC obtained.

Here’s a breakdown of the two cases based on two different reports, one prepared by the AG’s Office and another prepared by GPD.

The two individuals are Julius Nedlic and Jessie Lynn Underwood. While both were arrested and charged separately, the cases are intertwined as part of a larger drug ring involving other suspected drug dealers.

Here are some of the details: Armed with a bench warrant, on April 26, Superior Court marshals went looking for Nedlic for another drug-related case. They got a tip that Nedlic was at an apartment complex in Harmon and when they arrived they found him exiting a red Toyota Camry.

According to authorities, Nedlic tried to flee but marshals were able to apprehend him. On him, police say they found over $2,000 in cash, marijuana, methamphetamine and paraphernalia. Nedlic told authorities that the drugs and cash belonged to him the but car was loaned to him by an individual not identified in the magistrate report prepared by the AG’s Office report. We now know that the red Toyota Camry was a rental under Torres’ name which Torres corroborated and was also confirmed in the confidential police report we obtained.

Police say Nedlic’s capture led them to a residence where Nedlic said he had been staying at. We now know that residence belonged to Torres as confirmed in the police report. Both the magistrate and police reports similarly indicate that drug paraphernalia was found inside the home.

While that may be the end of it for the magistrate complaint, the confidential police report we obtained describes a different situation that led police to Nedlic. The police report mentions the bench warrant, but it also says he was named as a source of methamphetamine the day before he was apprehended by Kala Jo Taitague.

Who’s Kala Jo Taitague? Turns out she was also arrested just the day before along with an Enrique Guerrero after police raided their apartment in Agana Heights. Inside their apartment, police found thousands of dollars in cash, firearms, marijuana, crystal meth and LSD.

The magistrate report says Guerrero claimed Underwood asked to have packages of ice delivered to his Agana Heights residence and as a form of payment he would get one gram of ice.

So police were able to obtain a search warrant for Underwood’s condo in Tumon. When they executed the raid, Underwood was nowhere to be found. Instead, authorities found Kala Jo Taitague—Underwood’s girlfriend. And according to Underwood’s magistrate report, police found a glass pipe and marijuana on Taitague, and in the home they found over $4,000 in cash, three grams of marijuana, 22 grams of ice and a drug ledger.

When Taitague was questioned, police say she gave up her girlfriend, claiming Underwood owned all but two grams of the ice and that Underwood was “involved in the sale of both marijuana and ice.”